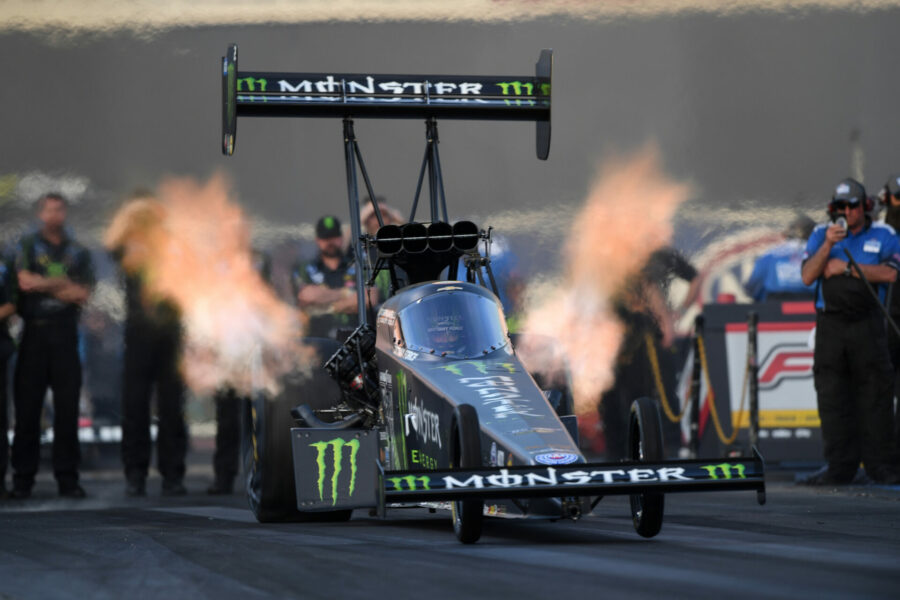 POMONA, Calif. (Feb. 19, 2022) – For the 33rd time in her career, Brittany Force took her Monster Energy / Flav-R-Pac dragster to the No. 1 qualifying position Saturday at the Lucas Oil NHRA Winternationals at Auto Club Raceway at Pomona. Robert Hight and the Automobile Club of Southern California Chevrolet Camaro SS team will start race day from No. 2 while Austin Prock landed the Montana Brand / Rocky Mountain Twist dragster in fourth and John Force got the PEAK / BlueDEF PLATINUM Chevy in the show at No. 16.

In true David Grubnic and Mac Savage tuning fashion, the Monster Energy / Flav-R-Pac dragster laid down a stellar 3.661-second at 333.91 mph to take over the No. 1 qualifying position for the 19th time in their last 31 starts. Like many of her competitors, Brittany Force ran into tire smoke on her first attempt on Saturday to coast to 7.915-seconds. Force will line up with Ron August Jr. in the first round of eliminations.

“It feels awesome just to be back out here at my home track, starting a new season with the Monster Energy / Flav-R-Pac team. I’m excited to be back with all of them, doing what we love. Even better to go No. 1 first race of the season it just pumps all of us up to see what we can do this season,” Force said. “I love it here in Pomona. I grew up here, sitting in the stands watching my dad. So, this is a very special track to me. It’s where my love of drag racing began. I have so many great memories here, standing in the winner’s circle with my dad and my sisters. Standing in my own winner’s circle in 2017 when we won the championship. So to win here at the opening of the season, that’s what we’re going for. That’s why we’re here.”

Coming into the second qualifying session, Robert Hight and the Auto Club team ran into tire smoke mid-track to coast to only a 5.934-second pass. The Auto Club Chevy cleaned things up in the final try with a 3.861 pass at 331.36 mph. Despite the improvement from their 3.882 on Friday evening, the Auto Club Chevy will be starting from the No. 2 position to face Jason Rupert round one after being bumped by Ron Capps.

“That was a pretty good run today. You know we were lined up to run John in the first round which, not ideal, but it is what it is. I knew Jimmy and Chris would still throwdown. Capps over there, we really gave the fans a show with the header flames lit. It was a good side-by-side qualifying run and probably a pretty good showing of what we’ll get tomorrow during race day with the cooler conditions,” Hight said. “I’m looking forward to it. We want to set the tone for the rest of the year and set it right, like we did in 2019. I think we have the pieces to do it so I’m excited. It’s going to be a good day.”

Austin Prock and the Montana Brand / Rocky Mountain Twist dragster team had their own bout with tire smoke to start Saturday before laying down a solid 3.711-second pass at 331.85 mph to move into the No. 4 spot.

“Great end to the day. Made a nice pass, pretty proud of that,” Prock said. “We were trying to run right around there, maybe a little bit quicker. I felt like it was getting a little loose down the track. We should be shaped up pretty well tomorrow. We get to race Clay Millican. I’ve been hungry all weekend. I led the class off the starting line this weekend so far, so if I can keep doing that tomorrow we should be able to go some rounds.”

John Force and the PEAK / BlueDEF Chevy made it into the show Saturday with their 4.240-second pass a 216.45 mph early Saturday. The 16-time champion had to pedal his Chevy Camaro during his final try of the day after it rattled the tires before shutting off for a 7.164. Force will face-off with long-time competitior Ron Capps in the first round.

“Well, we’re in the show. That’s all that matters,” Force said. “We’ll be okay tomorrow, new day, cooler conditions, we ran good at testing, so we’ll figure it out. Brittany over there with Monster going No.1 and Robert landing the No. 2 spot for Auto Club, Austin Prock he ran good tonight too. We just have to go out, take this BlueDEF Chevy A to B and go some rounds.”

Eliminations at the Lucas Oil NHRA Winternationals at Auto Club Raceway at Pomona are slated for Sunday at 11 a.m. Television coverage of the season opening event will be aired on FOX Sports 1 (FS1) with a qualifying show on Sunday at 7 a.m. ET and eliminations on Sunday at 10 p.m. ET.