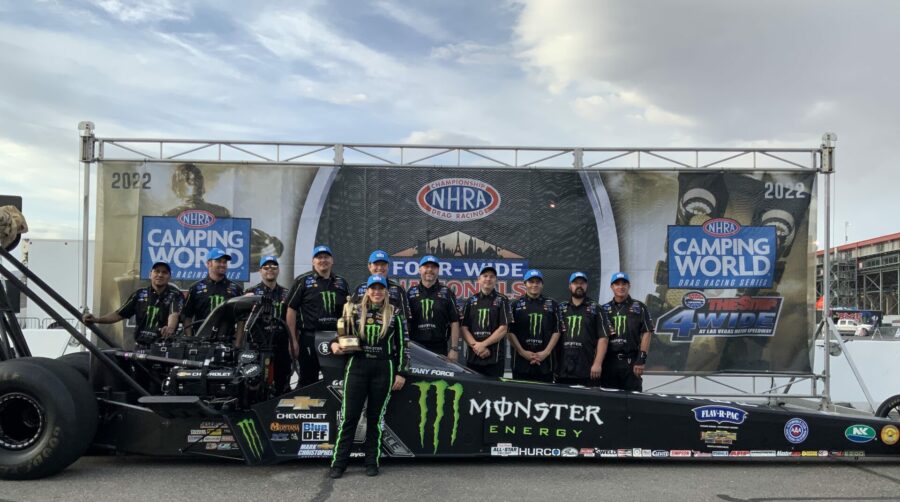 LAS VEGAS (April 03, 2022) – Brittany Force and the Monster Energy / Flav-R-Pac Top Fuel dragster team had a dominating performance Sunday at the NHRA Four-Wide Nationals at The Strip at Las Vegas Motor Speedway to earn their first win of the season, 12th of Force’s career. Robert Hight and the Automobile Club of Southern California Chevrolet Camaro SS team earned semifinal points for making it to the final quad. Austin Prock with the Montana Brand / Rocky Mountain Twist dragster and John Force with the PEAK / BlueDEF PLATINUM Chevy each had quarterfinal points finishes.

In what has very much become David Grubnic and Mac Savage fashion, Brittany Force and her Monster Energy dragster would start race day by laying down the second quickest run of the weekend when they blasted to a 3.747-second run at 334.32 mph to defeat Josh Hart’s 3.798 and Cameron Ferre’s 5.899. Force would be second best to Steve Torrence’s 3.720 at 327.27.

Force and the Monster Energy team would keep the momentum rolling into the second quad against Torrence, Leah Pruett and Shawn Langdon. It would take a 3.725-second pass at 329.58 mph for Force to win the quad. Torrence would runner-up with his 3.744 while Pruett (3.745) and Langdon (3.884) would have their day come to an end.

In the finals, the Monster Energy / Flav-R-Pac dragster team would leave nothing to chance laying down a stellar 3.718-second run at a blistering 338.00 mph to be both quickest and fastest of the weekend. The final quad would have an all-star lineup with Torrence, Tony Schumacher and Antron Brown lining up against Force. Among them they would have a total of 16 championships. Torrence would come in runner-up with a 3.756 at 326.71 followed by Schumacher (4.713) and Brown (5.086) who each earned semifinal points.

“What an awesome race day for this Monster Energy / Flav-R-Pac team. At the end of the day it was just consistency. We had our eye on a specific lane but it didn’t always go that way. We managed to get the job done, we were able to figure it out and get the car down there and turn some win lights on,” said Force who now sits second in points. “All day we had a tough line up; first round, semis and then in that final round, Tony Schumacher, Antron Brown and Steve Torrence. It was not easy; it was tough all day long for this Monster Energy / Flav-R-Pac team, David Grubnic, Mac Savage, all our guys, but we pulled it off. It was exciting to do at a four-wide.”

“All in all it was a good day for this Auto Club Chevy team. We kept creeping up on it and, it’s encouraging,” said Hight who is now second in points. “We were low ET first round and low ET second round. And we were on our way to being low ET in the final, but it put a cylinder out, number four, which it never does. So, there was something wrong. But it still ran .94 with a cylinder out at one second so the thing’s got a lot of potential.”

Austin Prock and the Montana Brand / RMT dragster continued their progress Sunday. In their first quad, Prock would be second quickest with a 3.803-second pass at 324.83 mph bettering Jim Maroney’s 3.973 and Justin Ashley’s 9.845. Prock was outrun by only Clay Millican and his 3.768 at 321.65.

“This Montana Brand / Rocky Mountain Twist team did really well. We made a huge rebound today. We made a lot of changes and everything worked right. We made two clean passes and didn’t hurt any parts,” said Prock who is sixth in points. “Obviously, we wanted to go into the final round there, but just missed it a little bit, but we made another clean pass and, all in all, it was a good day.”

Force would line-up against teammate Robert Hight, Alexis DeJoria and Blake Alexander in the second quad. Force would come in third with a 3.983-second pass at 318.17 mph falling short to Hight’s 3.864 and DeJoria’s 3.936.

“Well that Robert Hight in the Auto Club Chevy, took me out again. No, it wasn’t a bad day, all our cars went some rounds, this PEAK BlueDEF Chevy made some good runs,” said Force who is fifth in points. “We’re getting there. We had to make a lot of changes. Danny Hood and Tim Fabrisi and all my guys had to make some adjustments. We’ll come out and test tomorrow and get ready for the rest of the season.”

The NHRA Camping World Drag Racing Series season continues April 22-23 with the NHRA SpringNationals at Houston Raceway Park, the final national event that will be hosted at the facility.