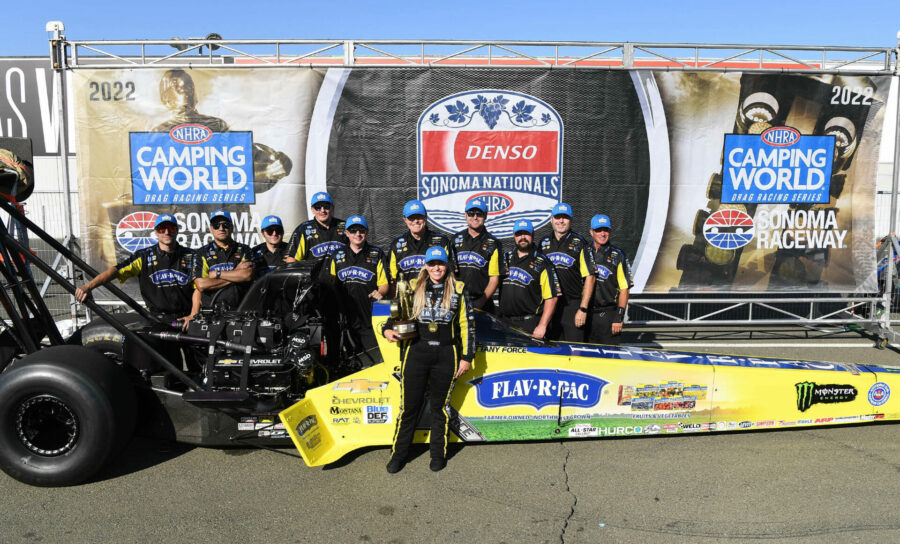 SONOMA, Calif. (July 24, 2022) – Brittany Force and the Flav-R-Pac / Monster Energy Chevrolet dragster team dominated Sunday at the DENSO NHRA Sonoma Nationals at Sonoma Raceway to tally their fourth win of the season, 15th of her career and first at the beloved Northern California facility. The father-daughter Force duo narrowly missed a chance to double up with John Force and the PEAK Antifreeze and Coolant Chevy Camaro finishing runner-up in Funny Car. Robert Hight went to the semifinals with the Automobile Club of Southern California Camaro and Austin Prock with his Montana Brand Rocky Mountain Twist team had their day cut short by their teammate in the first round.

En route to victory, Brittany Force and her David Grubnic and Mac Savage led Flav-R-Pac dragster team set four track records including the track speed on three different runs on Sunday. They started with a first-round win over teammate Austin Prock where they laid down the track elapsed time record of 3.662-second pass and wand their first speed record of 336.07 mph. The 2017 champion then defeated four-time and reigning world champion Steve Torrence in the second round with a 3.663 pass at an even faster 336.49 mph to his 3.716 at 329.18.

It was in the semifinals that Force ran the fourth fastest Top Fuel pass in NHRA history at 337.75 mph and 3.675-seconds to defeat veteran racer Shawn Langdon. The win would set her up to run against Mike Salinas for not only a bucket list win at Sonoma Raceway, but the NRHA Camping World Drag Racing Series Top Fuel points lead.

“Incredible race day for this Flav-R-Pac / Monster Energy team. Coming into races, you go off of how you have done in the past and we’ve always struggled with the Western Swing. Sonoma has always been one I’ve wanted to win. It’s almost a home track for me. I’ve watched my dad as a kid with my sisters, raced super comp and A-Fuel, celebrated all the other John Force Racing team wins, to be able to pull this win is huge,” Force said. “This team has been fantastic all day long improving every run, just a huge thank you to all my guys and David Grubnic and Mac Savage. Grubby, he’s one of the best I’ve ever worked with, he was confident all day today. We had been struggling the last couple of weekends, but we were really able to turn it around today, this great.”

“It was a good day for this PEAK Chevy. Yeah, would have been better to get the win but we figured some things out from qualifying. Danny Hood and Tim Fabrisi had my hot rod running well, we were getting after it today,” Force said. “We’re in a good place, we’ll pick up and just get it after it again in Seattle in a couple days. Flav-R-Pac race, looking forward to putting on a show for everyone, Brittany going in there with a win, hopefully do it again.”

Coming in as the No. 1 qualifier, Robert Hight and the Auto Club Chevy were vulnerable in the first round going only 4.021-seconds at 260.31 mph after some tire spin mid-track. Luckily, Jeff Diehl had to shut off early after losing traction for a 5.284 pass at 137.55. In the second round, Hight would send Jim Campbell and his 3.997 run at 318.54 home with a clean 3.943 at 324.75 setting Hight to run against long-time rival and eventual race winner Bob Tasca III.

It would be an impressive side-by-side race with Hight taking the starting line advantage. Tasca would narrowly gain the lead crossing the finish line first with a 3.907-second pass at 326.87 mph to Hight’s 3.925 at 326.56.

“We had the car to beat all weekend. This Auto Club Chevy, we’re pushing it and these guys are working hard to be perfect every run. Just couldn’t get the job done today,” Hight said. “Still in the points lead, gained some good points and we’ll just pick up and try it all over again in Seattle next week.”

Austin Prock and the Montana Brand / RMT Top Fuel team will continue to hunt for their first win of the season after suffering a first-round loss to teammate Brittany Force. Prock would lay down a 3.743-second pass at 321.72 mph, but it wouldn’t be enough for Force’s track record 3.662 at 336.49.

“It was a tough match up against our teammate Brittany today, but happy she got the job done for JFR. We made a competitive pass, even on seven cylinders. Myself and this Montana Brand / Rocky Mountain Twist team are confident that we can drop the door Friday and be competitive in Seattle next weekend,” Prock said. “We made progress and feel like our car is capable of being a contender again. We would love to keep our reigning champ status in Seattle after next weekend.”

The Flav-R-Pac NHRA Northwest Nationals at Pacific Raceways in Kent, Wash. just outside of Seattle closes out the three-race Western Swing on the NHRA Camping World Drag Racing Series next week, July 29-31.