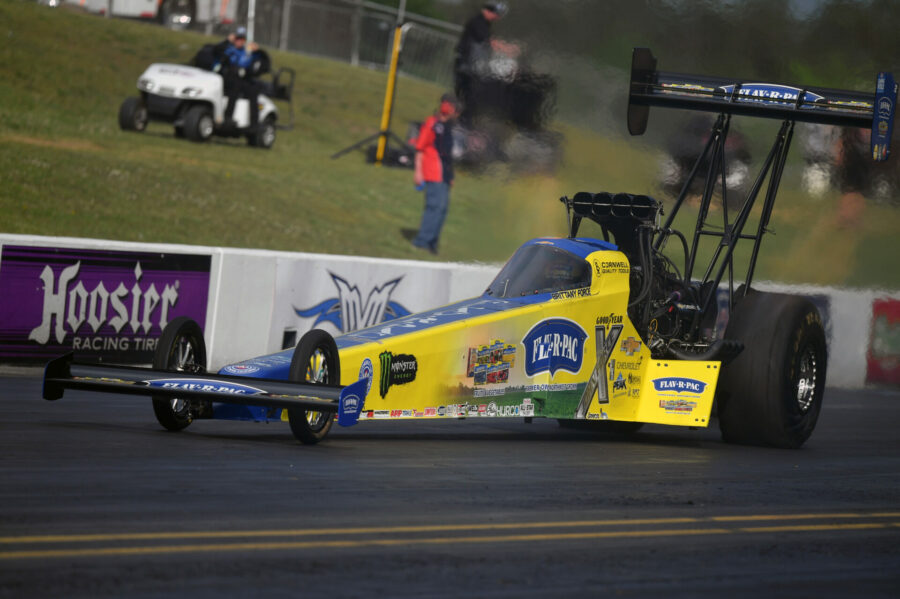 DINWIDDIE, Va. (May 13, 2022) – Brittany Force and the Flav-R-Pac / Monster Energy team set both ends of the Virginia Motorsports Park track record on their way to the provisional No. 1 spot Friday at the Virginia NHRA Nationals. Force now owns track records at 15 of the 19 facilities on the NHRA Camping World Drag Racing Series schedule. Austin Prock and the Montana Brand / Rocky Mountain Twist team sit No. 7, John Force with his PEAK / BlueDEF PLATINUM Chevrolet Camaro SS are No. 4 and Robert Hight has the Automobile Club of Southern California Chevy Camaro No. 12.

After battling Mother Nature for much of the day, Brittany Force rocketed the Flav-R-Pac dragster to a 3.710-second pass at 335.82 mph. Force is now the elapsed time record holder at 11 tracks and the speed record holder at eight and owns nine of the top 10 quickest runs in Top Fuel history.

“This Flav-R-Pac / Monster Energy team, we were just excited to get a run in. The weather cleared up and David Grubnic had a goal set and we hit that mark,” Force said. “We’re happy about that. It was a good, solid run and we’re hoping for two more, or at least one more run tomorrow. It was great to make that run here at Virginia Motorsports Park. It’s been since 2019 that we were here last, so to be able to come out here for the fans who waited out the rain and make that run and put a show on for them, that was great. We just want to keep improving and see what we can do on race day.”

John Force pedaled the BlueDEF Chevy to a 4.094-second pass at 323.58 mph to land in the No. 4 spot. The PEAK / BlueDEF Chevy lost traction mid-track but the 16-time champion got the tires hooked back up to set-up for a decent run.

“Well that worked out. Especially with how conditions look for tomorrow, we needed to make sure we got a run in and had a decent position. So, this PEAK Chevy is in, and we’ll just have to see how tomorrow goes,” Force said. “We’re coming off the win and that gives you some confidence but it’s a new weekend and we have to put in the work to be consistent.”

“It was a good start to the weekend. Just trying to make a nice clean A to B pass to get set up for Sunday. We had all the clutch settings reeled way in to try to get a good baseline for when it’s hot on Sunday, when it counts. We did exactly that. Sitting around wasn’t too bad today. I’m just happy to be back at the racetrack. Two weeks off, a weekend off, is a long time away from doing what you love to do.”

Sitting second in the points standings, Robert Hight and the Auto Club Chevy had to shut-off early to coast to an 8.517-second pass at 84.37 mph to end up No. 12.

“Obviously not what we wanted to do. Hopefully things clear up for tomorrow and we get another chance at it, but if we don’t, we’re in and I’m confident we will be fin on race day,” Hight said. “I’m not worried, I know we can go out there and get the job done. Jimmy Prock, Chris Cunningham and this whole team, we’ll pull together, and we’ll see how it goes.”