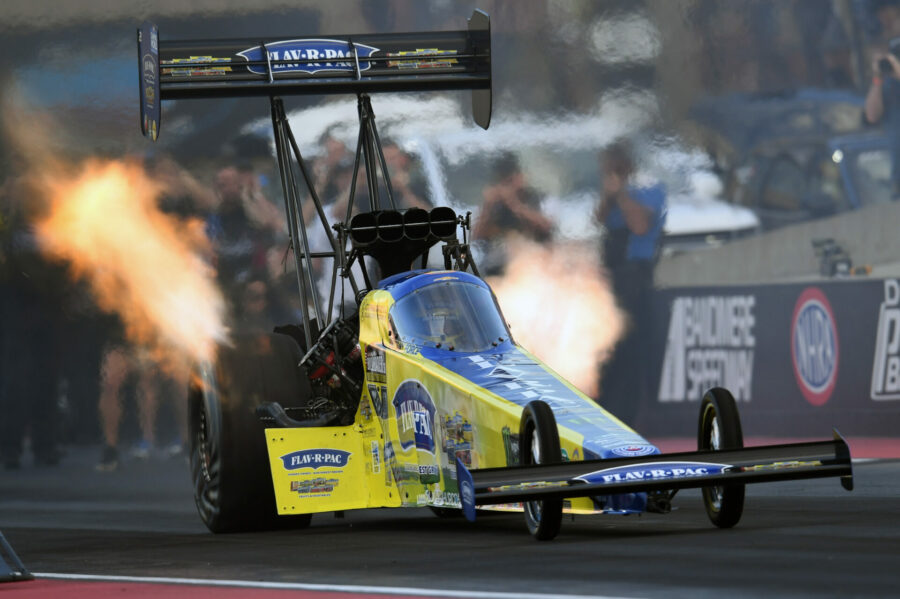 MORRISON, Colo. (July 16, 2022) – Brittany Force and the Flav-R-Pac / Monster Energy Chevrolet dragster claimed their fourth No. 1 qualifying position of the season Saturday at the Dodge Power Brokers NHRA Mile-High Nationals. Robert Hight and the Automobile Club of Southern California Chevy Camaro are No. 2 with John Force and the PEAK Antifreeze and Coolant Camaro No. 3. Austin Prock landed the Montana Brand / Rocky Mountain Twist dragster in the No. 7 spot.

Brittany Force and the Flav-R-Pac team found their form Saturday when they laid down a 3.816-second pass at 325.53 mph in the third qualifying session jumping them from 14th to No. 2. The improvement continued as the David Grubnic and Mac Savage tuned dragster went to the top with a stellar 3.758-second pass at 325.61 mph for the 36th No. 1 of Force’s career.

“This Flav-R-Pac team is excited about our runs today. We struggled yesterday, couldn’t get down there, problem after problem. Rolling in this morning we were sitting right on that bump. It’s nerve racking, there’s 17 cars here, we want to make sure we get in the show, we want to be top four top 5,” said Force who will race against Terry Totten in the first round of eliminations. “We turned it around today, made two solid passes. We’re feeling good. Great position, it’s exciting but our main focus is race day tomorrow. We’ll have to go home , evaluate everything, have to adjust for the heat but we’ll be looking for four solid runs.”

Robert Hight took the Auto Club Chevy on the seventh quickest and fifth fastest run ever on Bandimere Speedway with a 3.929-second pass at 323.58 mph that ultimately earned him the No. 2 spot. The Auto Club Chevy stayed consistent Saturday evening with a 3.962 at 310.27 to be fourth quickest of the session. Sitting No. 2, Hight will face-off with Terry Haddock in the first round.

“Pretty good day for this Auto Club Chevy team. Had a couple of good runs. Would have been nice to have gotten that No. 1 but sometimes those are bad luck,” Hight said. “We’re looking really good heading into tomorrow. Conditions will be different than what we’ve seen the last two days, but with Jimmy Prock, Chris Cunningham and this Auto Club team, I’m not worried.”

John Force and the PEAK Chevy opened the day with a 3.942-second pass at 319.14 mph, his quickest pass of the weekend so far and third quickest of the session moving him into the No. 3 spot. Crew chiefs Danny Hood and Tim Fabrisi stepped up in the final session sending Force and the PEAK Camaro on a 3.930 pass at 325.14 to hold onto the No. 3 spot and race Jim Campbell in the first round.

“This PEAK Chevy, Danny and Tim, they have it going fast. It’s got consistency and that’s what we want. Good day for us, No. 3 right behind Robert in that Auto Club Chevy,” Force said. “Brittany over there with Flav-R-Pac taking No. 1 and that Prock kid, they’re figuring it all out. We’ll see how tomorrow goes. We’ve got NK Seeds out here for the first time and Frank Tiegs with Montana Brand and Flav-R-Pac, Gates Belts has been here, Cornwell Tools, all our sponsors. We’re hoping for a long day tomorrow and putting on a good show for all these fans who have shown up. Great crowd here at Bandimere.”

Austin Prock and the Montana Brand / RMT dragster ran into trouble during their first try on Saturday. After the burnout, Prock was unable to put the dragster in reverse and had to coast to the finish line without recording a time. Needing a jump from the No. 11 spot, the Montana Brand dragster had its best run of the weekend so far at 3.818-seconds and 314.46 mph to put them No.7 and up against four-time defending champion Steve Torrence in the first round.

“It was a rough start to the day for this Montana Brand / Rocky Mountain Twist team but finished strong in the last session. Our early numbers were stout, it just got lean in the middle and got robbed some power,” Prock said. “Tomorrow is going to be a whole new ball game for everyone, more temperature and full sun. It’s going to be a gamble for everyone. I’ve got some bad dudes in my corner and know we can get it done. We’ve got the Tiegs Family, and NK Seeds here this weekend and would love for them to see the wing dance celebration first-hand.”