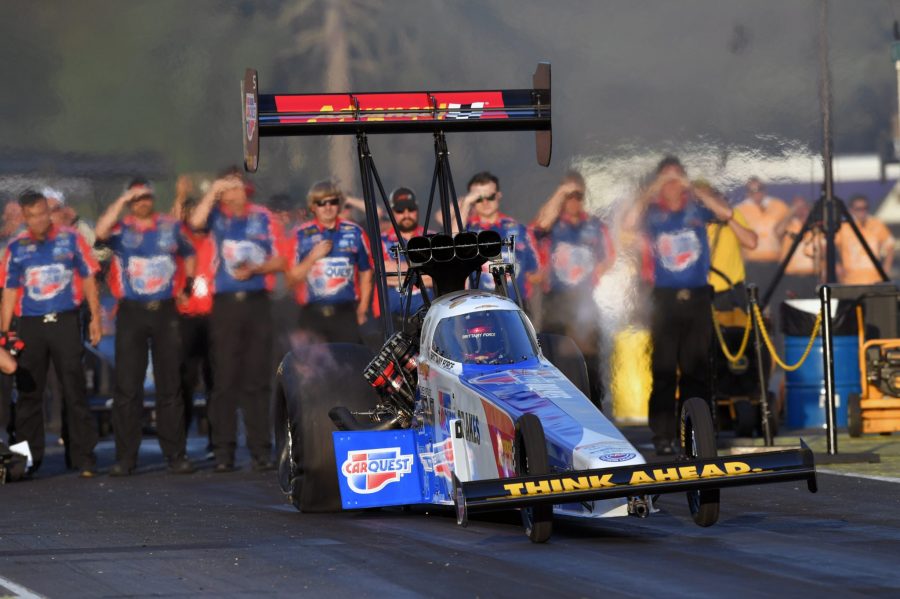 KENT, Wash. (Aug. 2, 2019) — Brittany Force and the Carquest Brakes Top Fuel team launched their way to the No. 2 qualifying spot Friday night at the Magic Dry Organic Absorbent NHRA Northwest Nationals at Pacific Raceways. Teammate Austin Prock and the Montana Brand / Rocky Mountain Twist hot rod are 12th, and in Funny Car, John Force is in the No. 4 spot with his PEAK Coolant and Motor Oil / Lighting team and Robert Hight is currently in seventh with the Automobile Club of Southern California Chevrolet Camaro.

In her first qualifying pass of the weekend at Pacific Raceways, Brittany Force handled her Carquest Brakes dragster to a solid 3.773-second pass at 316.23 mph after dropping cylinders down track to be ninth quickest. The 2017 Top Fuel world champion improved in the night session when she piloted her David Grubnic and Mac Savage tuned dragster to an impressive 3.702-second pass at 326.87 mph to move up seven spots into the No. 2 qualifying position.

“Today was a pretty good start to Seattle. It’s the last of the Western Swing and we need to turn things around and it starts at Friday qualifying. We’re off to a good start. We’re number two now, ran a 3.70, and we have all day tomorrow to get us set up for Sunday,” said Force who picked up two bonus points in the second session. “Feeling good, feeling confident with this Carquest Brakes team. We’ll be looking to pick up some more points tomorrow to help keep us up in the top half of the field and go some rounds on race day.”

Chasing his 150th Mello Yello tour victory, John Force started qualifying on a strong note when he powered his PEAK Coolant and Motor Oil / Lighting Chevy Camaro SS to a 3.891-second pass at 328.86 mph to earn three bonus points for being quickest right off the trailer. In the second session, Force lost traction and shut his hot rod off early for only a 7.533-second run at 85.03 mph, pushing him into fourth.

“Good race track today with NHRA’s prep. Cloud cover all day, pretty mild temperatures. We couldn’t get it done there in that second session. We have all day tomorrow, but it’s probably going to heat up,” said Force. “That first pass though, to run .80 here in Seattle, we expected it to run that good. We’ll see what this PEAK Lighting Chevy can do. Brittany is second with her Carquest Brakes team, that was really good.”

Entering the final event on the Western Swing the same way he’s entered every event since the season opener, in the points lead, Robert Hight closed out the first qualifying round with a 3.916-second pass at 325.22 mph to be fourth quickest. The racing veteran improved the performance of his Automobile Club of Southern California Chevy in the second session when he ran a clean 3.907-seconds at 331.28 mph to be the fastest of the pack but moved down the ladder into seventh.

“It was pretty competitive out there today. We had two decent qualifying passes to end the day in the No. 7 spot, but we want to be in that top spot. I have no doubts Jimmy Prock and Chris Cunningham, and this entire Auto Club team, can get us there,” said Hight. “Conditions will be a little warmer than they were today, but I think we can get some good runs in tomorrow. We’re coming off a win so we want to keep that momentum going through this weekend.”

Rookie of the Year candidate Austin Prock and the Montana Brand / Rocky Mountain Twist dragster team made a 3.827-second pass at 327.90 mph in session one of qualifying posting the fastest speed of the heat and second fastest of the day. Prock continued the trend of improving in the second session making a 3.778-second pass at 323.12 mph to start Saturday’s qualifying from the No. 12 spot.

“We struggled in qualifying today, just didn’t get after it. We ran .77 and improved in Q2 but need to pick up quite a few hundredths,” Prock said. “We need to keep picking at it and hopefully we can improve again tomorrow. We’ll be getting things set up for race day and looking to make this Montana Brand / Rocky Mountain Twist dragster go some rounds and move up in the points.”