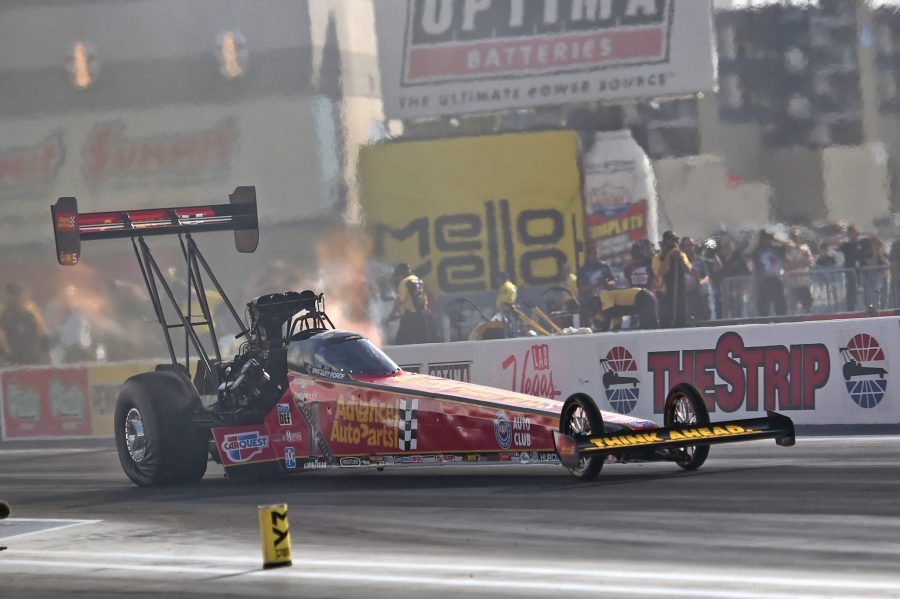 LAS VEGAS (April 5, 2019) — Brittany Force and the Advance Auto Parts team lead John Force Racing in the No. 3 spot after two rounds of qualifying Friday at the DENSO Spark Plugs NHRA Four-Wide Nationals at The Strip at Las Vegas Motor Speedway. Rookie teammate Austin Prock is 11th in his Montana Brand / Rocky Mountain Twist dragster and, in Funny Car, John Force is No. 7 and Robert Hight is No. 10.

Racing four-wide for the first time in the 2019 NHRA Mello Yello Drag Racing season, Brittany Force powered her Advance Auto Parts dragster to a 3.733-second pass at 322.88 mph to tentatively be quickest of the pack and pick up three valuable bonus points. In the second session, crew chiefs David Grubnic and Mac Savage planned for Force to make only a half track run.

“I got off to a good start with this Advance Auto Parts team. Its four-wide. It’s tricky for not just the driver but for the crew chiefs as well. You get one shot in each lane going into race day. We came out in Q1 and went right to the top. We ran a 3.73 and that moved us into the No. 3 spot,” said Force. “We had only planned to go half-track in the second run. We’re trying to fix and learn some things so we can speed it up a little and see how far we can push it until we hurt it, so that was planned and we’re not worried about it. We have two more runs tomorrow before going into race day.”

Sixteen-time champion John Force is sitting in the No. 7 spot after making two solid passes in his PEAK Coolant and Motor Oil / BlueDEF Chevy Camaro SS. Force ran a 3.982-second pass at 320.13 mph that had him ninth. The Funny Car legend picked up two spots with a 3.928-second pass at 318.77 mph in the second session.

“We kicked off the DENSO four-wide in Vegas, they’re a new sponsor this year. Bruton Smith built the Bellagio two. I call it two, first one’s in Charlotte. But bottom line, all our cars are in so no complaints,” said Force. “We have another day left of qualifying. Nothing really exciting but it’s coming.”

Points leader Robert Hight and his Auto Club of Southern California Chevy Camaro SS crossed the 1000-foot line with a 3.962-second pass at 323.97 mph for their first run of the day. The team ran into trouble dropping a cylinder in the second session and only ran 4.501-seconds. They’ll start Saturday qualifying in the No. 10 spot.

“It wasn’t our best day. We were kind of in the middle of the pack in the first run,” said Hight. “In the second run I dropped a cylinder and shut it off but you know, we’re going up there and we’re going to run 80s. Tomorrow we’ll be in the 80s and Funny Cars are running last tomorrow so the second session tomorrow is going to be our best qualifying shot. We’re going to try and make it four in a row and be No. 1.”

Austin Prock and the Montana Brand / Rocky Mountain Twist Top Fuel dragster team started Friday’s qualifying with a solid 3.877-second pass at 314.53 mph in the first session. The pass would put him in the No. 7 position. In session two, Prock improved to a 3.840-second pass at 316.97 mph but unfortunately the rest of the field would improve as well, putting him in the No. 11 spot.

“It’s our first time out here at the four-wide in Vegas. I didn’t drive the best today. I had two .80 lights back-to-back and I don’t think I’ve done that since I got into a nitro car so I’m a little disappointed with myself. I think I know what I’m doing wrong and hopefully I can get back into my average tomorrow and get down into the 50s and 60s and do my part,” said Prock. “I had a little bit of trouble with the engine dropping cylinders today. It was the first time we’ve been up in high altitude like this so I know Jon Schaffer and Ronnie Thompson will get a handle on it and we’re going to be a whole new team tomorrow. We’re going to do a great job. I have a whole lot of faith in them so I’m going to get a good night’s rest and get after it tomorrow.”

Qualifying at the DENSO Spark Plugs NHRA Four-Wide Nationals continues with sessions at 1 and 3:30 p.m. Saturday at The Strip at Las Vegas Motor Speedway. Eliminations are scheduled for Sunday at noon.