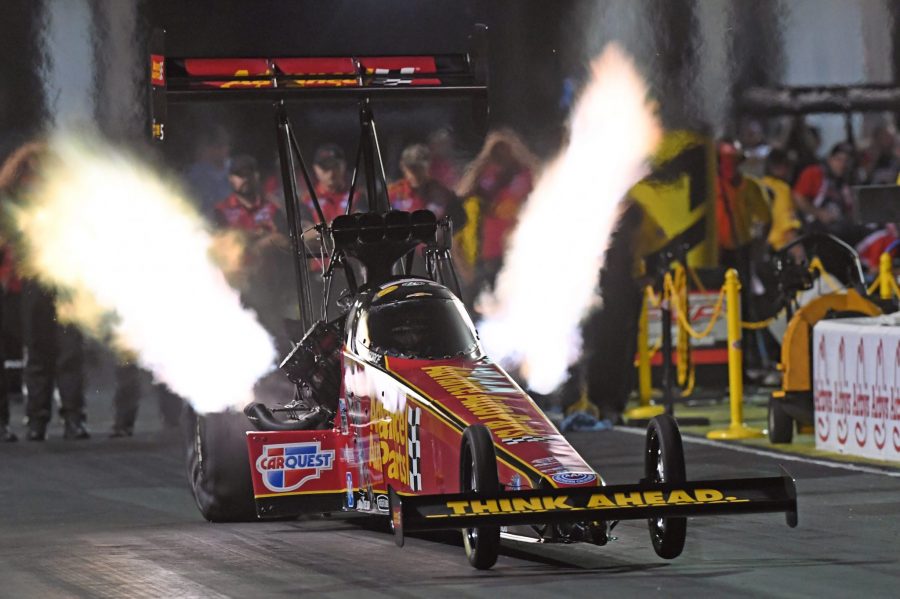 COMMERCE, Ga. (May 3, 2019) – Brittany Force and the Advance Auto Parts Top Fuel dragster team lead John Force Racing in the No. 1 qualifying position Friday at the Arby’s NHRA Southern Nationals. Force took the No. 1 spot after a short rain delay at the start of the second qualifying session. Her legendary father, John Force, is currently No. 2 with Robert Hight in 10th and rookie Austin Prock is 11th.

In the first qualifying session, Brittany Force powered her Advance Auto Parts Top Fuel dragster to a 3.857-second pass at 281.31 mph even after dropping a cylinder early on. The pass put her in the No. 4 spot heading into the night session. A short rain delay had the nitro teams qualifying under the lights with header flames lit for the second session. Force piloted her David Grubnic and Mac Savage tuned dragster to a stellar 3.720-second pass at 319.52 mph to land the current No. 1 position.

“I’ve been building confidence with this team. We’ve already won one, we were runner-up in Vegas and we’re hoping to hang onto this No. 1 qualifier going into this weekend. That was a killer pass. Grubnic said it’s going to do one of two things, its either not going to make it or its going to fly and we grabbed that No. 1 spot,” said Force. “I knew it was either going to blow the tires right off the hit or it was going to get right down there and fly. It’s a dark track but once I got down there, I saw exactly where that 1,000-foot marker was and was able to put a good number on the board.”

Sixteen-time Funny Car world champion, John Force ran into trouble when his PEAK Coolant and Motor Oil BlueDEF Chevy Camaro blew up at the start and was stranded at the eighth mile-marker. Force would be in the field but earned no time for session, putting him last in the Funny Car pack. The PEAK team pulled out their back-up car and waited through the rain delay before Top Fuel dragsters and an oil down after the first pass of Funny Car to lay down an impressive 3.958-second pass at 322.04 mph that gave him the No. 2 spot.

“Well I’ll be in the show for my birthday, don’t think you don’t think about that,” said Force. “NHRA worked hard on that track because it was oiled. And I just thought it wasn’t going to work, the dew was coming and it cooled down and I was fogging up in the car but (crew chiefs) Brian Corradi and Danny Hood made the right calls and it went right down there. Gotta give it to J.R. Todd, he put it right in there. I’m excited, I’ve got a good race car.”

Robert Hight and the Automobile Club of Southern California Chevy Camaro SS Funny Car team ran a 6.535-second pass at 99.63 mph after smoking the tires and shutting off early in the first session. In the second session, Hight’s Camaro started to move towards the centerline but he was able to pull back and clicked it off resulting in a 4.816-second pass at 162.90 mph. He would move up from the tentative No. 12 spot to No. 10.

“We didn’t run like we hoped we would today. Had problems in the first qualifying session and again in the second. We improved in that last one and are now No. 10 but we can do better and are looking to get this thing in the top of field,” said Hight. “This AAA SoCal team is working hard and (crew chiefs) Jimmy Prock and Chris Cunningham, they really know this thing. The conditions here are tough but I know we can do better and are hoping we get some solid passes in tomorrow.”

Rookie of the Year candidate, Austin Prock and the Montana Brand / Rocky Mountain Twist dragster team smoked the tires in session one to run a 5.896-second pass at 108.49 mph. Prock improved from the No. 15 spot to No. 11 off the efforts of a clean 3.843-second run at 319.37 mph under the lights in session two.

“We struggled in the first session, smoked the tires. I caught it really quick. My car feel, how I personally feel the car change, is better than ever. We’ve had different scenarios and I keep learning and trying to improve my skill set every time I go down the race track,” said Prock. “My second run, we just wanted to get down there because the weather doesn’t look too hot tomorrow. We wanted to run better than that but just missed it on power but we got it down there for Montana Brand / Rocky Mountain Twist. We gotta get our car performing better, get full pulls under our belt and we’re not going to let them down.”

Qualifying at the Arby’s NHRA Nationals continues Saturday with sessions at 12:30 p.m. and 3:30 p.m. Eliminations are scheduled for Sunday at 11:00 a.m.