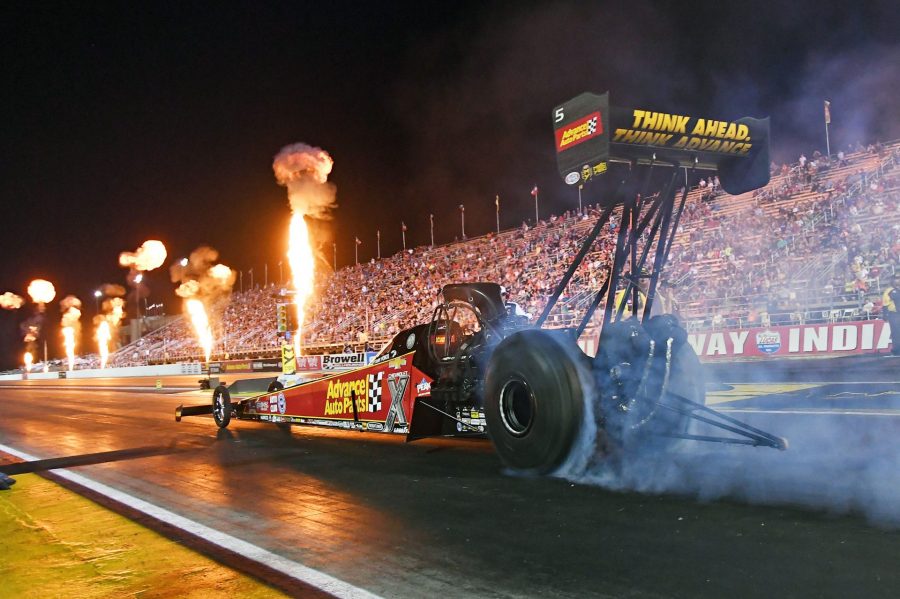 Sitting second in the NHRA Mello Yello points standings, Brittany Force, back in the colors of her Advance Auto Parts Top Fuel dragster, launched her 11,000-horsepower machine to a stout 3.670-second pass at 327.27 mph with header flames lit to steal the No. 1 spot. The Top Fuel phenom, paired with current points leader and reigning champion Steve Torrence, out-performed the rest of the Top Fuel class as the last run of Friday night’s pyrotechnic filled session.

“It definitely felt fast. You could feel it especially on the track out there, it’s a good race track. I saw some cars ahead of me that weren’t quite getting down that lane but we went right down there and put an awesome number on the board, a .67. We’ll take that No. 1 spot,” Force said. “I think that will hold up. It’s a pretty awesome run. Tomorrow we run a little bit earlier but the next few days are going to really be the important ones, the early sessions setting us up for Sunday. I have David Grubnic and Mac Savage behind me and we’ll get some good runs in all weekend. We’re really looking for consistency because that’s where we’ve been struggling in qualifying and qualifying well, so it’s a good start to this weekend and we’re very happy with that.”

Two-time Funny Car world champion Robert Hight raced his Automobile Club of Southern California Chevy Camaro SS to a solid 3.896-second pass at 331.94 mph for his first go at the Indianapolis race track, good enough for the fifth spot. With a 179-points lead, Hight only needs to lock in a qualifying position to win his first regular season championship and start the countdown from the No. 1 spot.

“Well, first, I’m glad we’re finally underway. It seems like it’s taking forever to get this race going and you know, we’re fifth. Not a terrible spot, we were hoping for a little more but if you push harder you also risk smoking the tires so we’re in a good spot,” said Hight. “Funny Cars go second tomorrow and it may cool off enough in the evening run to where the Auto Club Chevy can push. I think there’s more left out there and I’m not at all disappointed with tonight.”

John Force handled his PEAK Chevrolet Performance Accessories Chevrolet Camaro SS Funny Car to 3.942-seconds at 326.00 mph to land in the seventh spot with four qualifying sessions still left. The 16-time champion assured his spot in the countdown at the Northwest Nationals where he also conquered his 150th Mello Yello tour win and is sitting third in the points standings.

“Tonight, Robert Hight was fifth with that Auto Club team and I ended up seventh with PEAK and Chevrolet Performance Accessories. We were making sure we got our Chevy’s in the show but we got a lot left in them,” said Force. “Brittany was low ET in the Advance Auto Parts dragster, Prock and Montana Brand, well they had a problem out there but they’ll get it figured out, still a long weekend, lots more qualifying.”

Rookie of the Year candidate Austin Prock had trouble off the starting line when his Montana Brand / Rocky Mountain Twist dragster shook the tires early to run 7.404-seconds at 86.21 mph. With four more qualifying sessions to go at the Indianapolis race track, Prock is sitting eighth in the points standings and is looking to secure a spot in the Countdown.

“Tough night, not the way we wanted to start out but we got it behind us. The car shook and our computer system didn’t work so we got no data to see what happened. Tomorrow is a new day. We still have four more qualifying runs to straighten this thing out and I know we can do it,” said Prock. “I’m really excited to be at the U.S. Nationals. I’ve been dreaming about this ever since I can remember. I was watching the Funny Car session in front of us and it just hit me that I’m at the Big Go, so it’s definitely an exciting weekend and hopefully we can add a Wally to top it off”

Nitro qualifying at the Chevrolet Performance U.S. Nationals will continue Saturday and Sunday with sessions at 2 p.m. and 5 p.m. Eliminations are scheduled to start Sunday at 11 a.m. Catch the action on FS1 Sunday at 2 p.m. and 4 p.m. ET with Finals coverage starting Monday at 11 a.m. ET and continuing at 1 p.m. ET on FOX Broadcast Network.