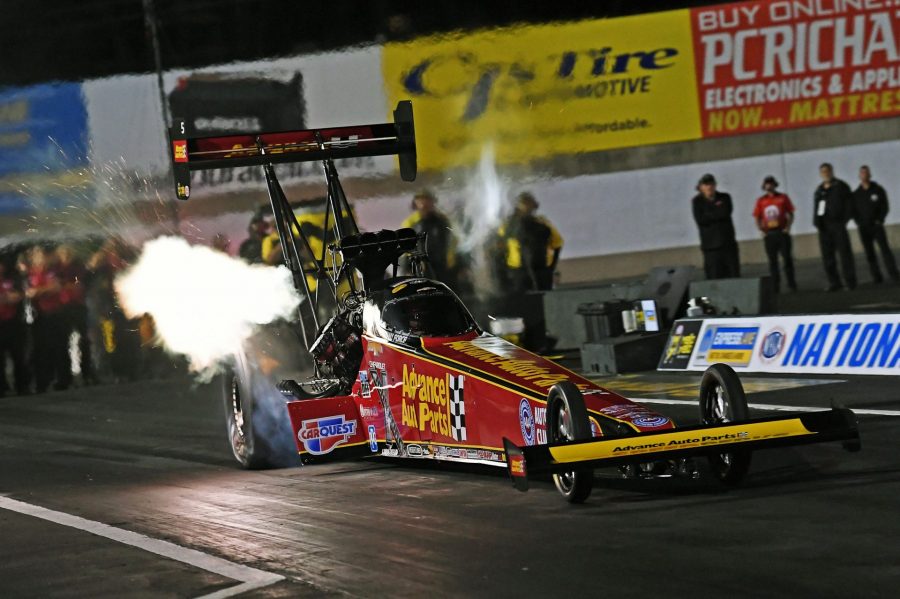 READING, Pa. (Sept. 13, 2019) — On opening day of the NHRA Mello Yello Countdown to the Championship, NHRA’s six race playoffs, Brittany Force and the Advance Auto Parts team set a track record on their way to the preliminary No. 1 spot Friday night at the Mopar Express Lane NHRA Nationals presented by Pennzoil. Teammate Austin Prock is in the No. 6 position with his Montana Brand / Rocky Mountain Twist machine, and in Funny Car, Robert Hight and the Automobile Club of Southern California team are currently No. 8 and John Force, with his PEAK Coolant and Motor Oil / Blue Diesel Fuel Additives Chevy Camaro SS, are 14th at Maple Grove Raceway.

Chasing her third consecutive No. 1 qualifying position and seventh of the season, Brittany Force laid down a stellar 3.651-second pass at 332.92 mph. With header flames blazing on her Advance Auto Parts dragster, the 2017 event winner set the track elapsed time record and jumped five positions into No. 1. Force was impressive all day as she opened qualifying with a solid 3.721-second pass at 329.67 mph.

“That 3.651 run felt awesome. I’m excited to be here at Maple Grove. This is the first race of the Countdown and we’ve been breaking records recently, last weekend and this weekend, so it feels good that we’re starting to turn a corner and really figure things out right when it matters, going into the Countdown,” said Force who also set the elapsed time record at the Chevrolet Performance U.S. National contested at Lucas Oil Raceway at Indianapolis. “We’re No. 1 right now and we’re hoping to pick up more points tomorrow and go out and win this thing.”

In his first pass down Maple Grove Raceway, rookie driver Austin Prock handled his Montana Brand / Rocky Mountain Twist dragster to an impressive 3.697-second pass at 328.94 mph. The career best elapsed time put him third quickest of the Top Fuel class and earned him a bonus point. In the second session, Prock’s dragster lost traction and he had to shut it off early for only 6.985-seconds at 93.22 mph. He’ll start Saturday’s qualifying from No. 6.

“We ran a career best here this afternoon, a 3.697, two thousandths quicker than I went in Pomona. Good start going into the Countdown. I got one bonus point and every point is going to count in this six-race shootout, so I’m pretty proud of that,” said Prock. “We went up there trying to improve and run a .67 tonight and it just didn’t hold. I thought it was going to go and it shook past the 60-foot mark, which is odd. So, I felt something new, we learned something new. Going to get them tomorrow, it’s going to be a gorilla.”

Starting the NHRA Countdown from the No. 1 spot, Robert Hight closed out the first session of qualifying with a 4.436-second pass at 285.65 mph after shaking the tires and pedaling his 11,000-horsepower Auto Club Chevy Camaro SS to the finish line. Hight lost traction on the second run and shut off to cross the finish line at 7.079-seconds and 90.21 mph putting him in the No. 8 spot.

“We’ve been doing a lot of work on this Auto Club Chevy. We took a day to test and we’ve been working on some things. Jimmy Prock, Chris Cunningham, this whole team, they know how to make this car go when it counts,” Hight said. “Today wasn’t the day we wanted but we’ll get back to it tomorrow and make some moves. We’ll be ready come Sunday.”

In his first qualifying pass of the weekend, John Force had to shut his PEAK Coolant and Motor Oil / Blue Diesel Fuel Additives Chevy Camaro SS early after experiencing tire shake. He’d record an 8.116-second pass at 79.95 mph. The sixteen-time Funny Car world champion had trouble in the night session when he crossed the centerline to have his run disqualified. He’ll have two more attempts to better his No. 14 spot.

“We’re lucky to be in. I got it over on the centerline in that second run and it was just driver error, the driver has to control it. It just happened so quick but I’ll fix it tomorrow,” said Force. “Brian Corradi and Danny Hood, all the guys on my PEAK team, they’ve given me a good race car so tomorrow we’ll do better. Brittany is No. 1 right now with Advance, set the track record with her ET. The Prock kid and Robert did good today too. We’re in the Countdown and we’re all working hard.”

Qualifying at the Mopar Express Lanes NHRA Nationals presented by Pennzoil, will continue Saturday at Maple Grove Raceway with sessions at 1:45 and 3:45 p.m. and with television coverage on FOX Sports 2 (FS1) from 9-10 p.m. ET and on FOX Sports 1 (FS1) from midnight until 1 a.m. E.T.