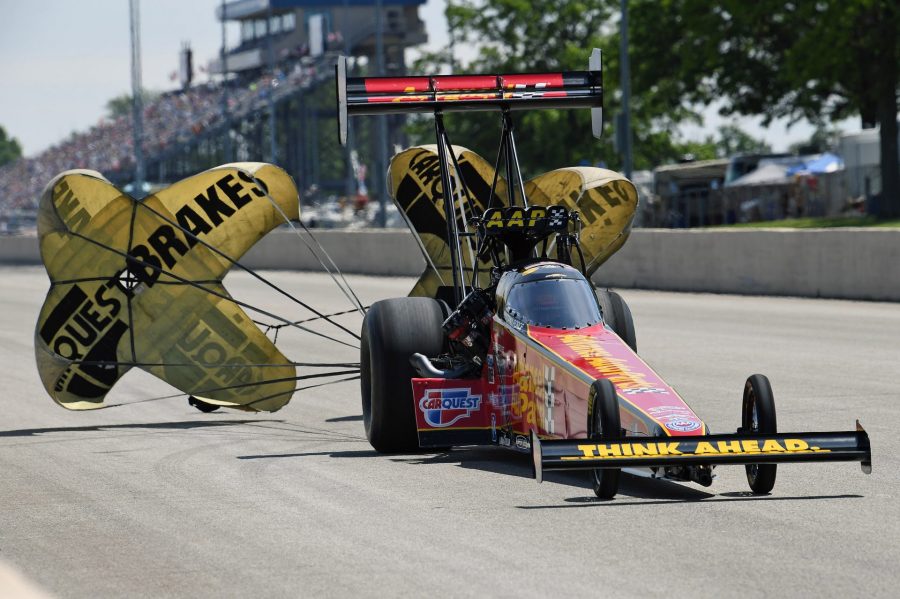 BROWNSBURG, Ind. (Aug. 28, 2019) — Motivated by her high performance at the recent NHRA Nationals in Brainerd, Minn., Brittany Force, back in the colors of Advance Auto Parts, is making her way to the Chevrolet Performance U.S. Nationals eager to continue the upward momentum.

Two weeks ago, at Brainerd International Raceway, Force launched her David Grubnic and Mac Savage tuned hot rod to the No. 1 spot after laying down a stout 3.772-second pass at 328.14 mph. It marked her fifth No. 1 qualifier of the 2019 NHRA season, first at the facility and 15th of her career. The 2017 Top Fuel world champion continued her strong performance on race day first running a 3.728-second pass at 332.75 mph and followed it up with a solid 3.730 at a blistering 331.77 in the quarterfinal. Although she would fall short of advancing to the next round to teammate Austin Prock, she kept her No. 2 spot in the points standings and left with a secured position in the NHRA Countdown to the Championship.

“We had a good weekend at the last event in Brainerd. Got the green hat, a place in the Countdown and had some impressive runs in the 70s. We were beat on reaction time in round two so that was hard, but I just need to get my head in the game,” said Force. “We stayed and tested in Brainerd and after testing and learning a few things, the Advance Auto Parts team is looking forward to the biggest race of the season, the U.S. Nationals.”

Force enters the 18th and final event of the regular NHRA Mello Yello Drag Racing Series season with a win at the SpringNationals, two runner-up finishes at the Four-Wide in Las Vegas and Southern Nationals, a semi-final appearance and five No. 1 qualifiers that include two history-making green hat starts. At the famed Gatornationals in Gainesville, Fla., Force became the first woman since Shirley Muldowney in 1979 to qualify No. 1 at the event. Then, at the SpringNationals, Force and her father, John Force, each took the top spots making them the first professional parent-child duo to be No. 1 in NHRA history. Although Force has yet to pick up the yellow hat at Lucas Oil Raceway at Indianapolis, she has a semifinal finish and a handful of solid qualifying efforts under her belt.

“I’ve been coming to the Indy race with my sisters and parents since I was a baby. I have pictures in my dad’s winners circle going back 30 years. This track has so much history for my family. Next to winning a championship, every driver and teams’ goal is to win Indy,” said Force. “My dad has won four times and Ashley won two years in-a-row. This year I’d like to add my name in the book next to theirs with David Grubnic, Mac Savage and all the Advance Auto Parts boys. We’ve had our ups and downs all season long but we all feel confident going into Indy and this Countdown.”