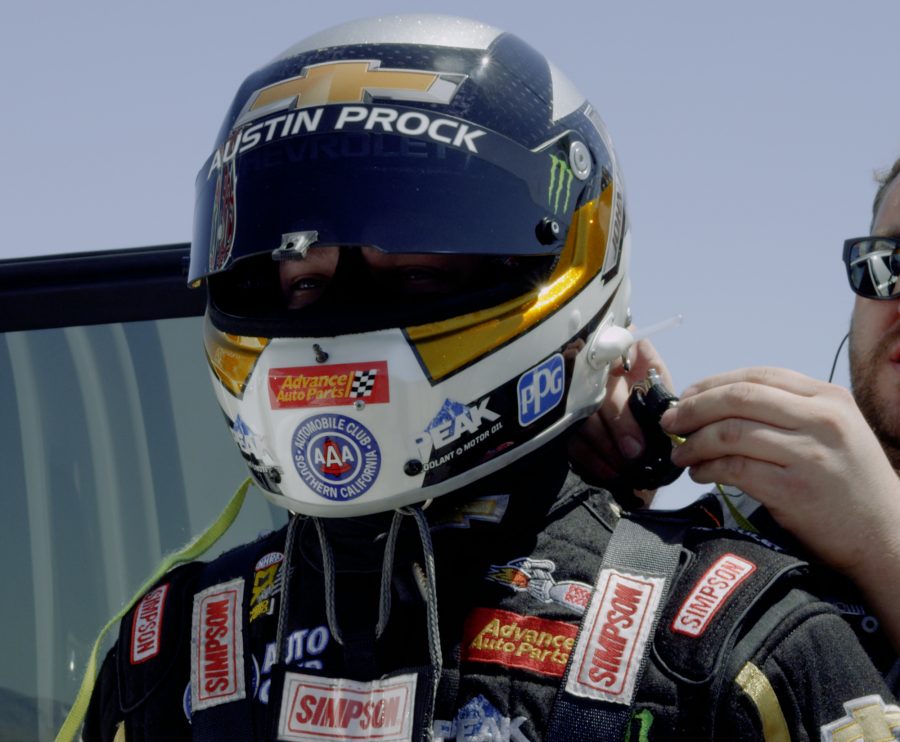 As the newest member of John Force Racing’s Next Generation initiative, Prock took the next step in getting his professional Nitro Funny Car license when he tested in the Advance Auto Parts Chevrolet Camaro SS Funny Car following the inaugural Four-Wide event held at the venue.

“Austin Prock, love the smile. He comes from a great family, I raced against his grandfather Tom Prock in the early days,” said John Force, founder and CEO of John Force Racing. “He’s been taught by the best at Frank Hawley’s Drag Racing School and has been in competition in A-Fuel. He comes from the roundy-round background but he gets it.”

Throughout the day, Prock took the tree three times with planned shut-offs at various points down track.

“It felt just as I expected. I woke up Monday morning and was sick to my stomach I didn’t know if I was getting sick or if it was just nerves. It ended up being nerves. I got strapped in that thing, got my mindset right and went out there and made my first hit to 330 feet. I felt right at home,” said Prock who currently works on the Monster Energy dragster piloted by Top Fuel world champion Brittany Force. “It’s amazing to be out here. I have to thank John Force for giving me the opportunity to drive for him. All the guys busting their tails out here. It’s a lot of work, I work on one myself and I really appreciate all they’re doing,”

Prock, 20, earned his Alcohol Funny Car license in October 2017 at Frank Hawley’s Drag Racing School in Gainesville, Fla. The young driver will continue to test and work towards his Nitro Funny Car license throughout the 2018 season. He’ll be making passes in all three of the John Force Racing Chevrolet Camaro SS Funny Cars.

“I’m going to be doing a lot more of this,” Prock explained. “I’ll get to work with my dad a little bit which will be awesome. Working Monday with Brian Corradi and Danny Hood was great, they’re awesome too. Jon (Schaffer) and (Jason) McCulloch they’re great tuners as well.”

“There’s a lot of work ahead of us. We will continue to test him in all three Funny Cars as available. Possibly in the Top Fuel dragster. Everything is based on financial and requires a sponsor. That’s our job. His job is to learn the car operations and to get seat time. He will also be attending media school this year. It’s all in the three-year plan,” added Force, driver of the PEAK Coolant and Motor Oil Chevrolet Camaro SS Funny Car.

Robert Hight, driver for the Auto Club team and a two time and reigning Funny Car world champion, is the most successful driver to emerge from John Force Racing’s Next Generation initiative which also developed the reigning Top Fuel champion Brittany Force, her sisters Courtney Force, who has won more Funny Car races than any other woman, and Ashley Force Hood, the first woman to win a race in the Funny Car division, and the late Eric Medlen, who started it all in 2003.