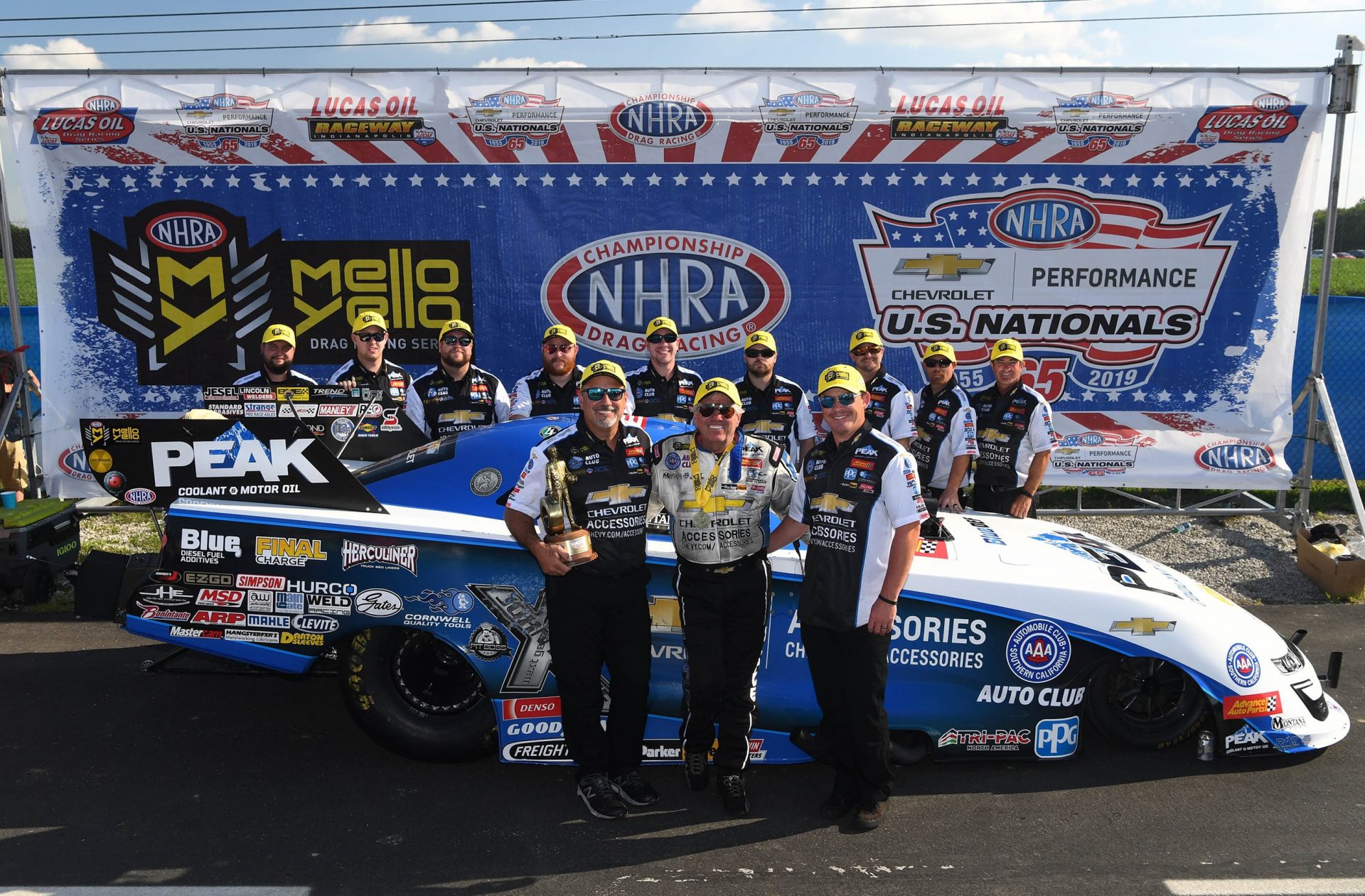 Teammate Austin Prock and the Montana Brand / Rocky Mountain Twist team ended their day in the semifinal, and Robert Hight with his Auto Club Chevy Camaro SS and Brittany Force with the Advance Auto Parts dragster team both exited in the second round.

Making his 40th Indy appearance, Force and the PEAK Chevrolet Performance Accessories Chevy Camaro SS team picked up the win against Jonnie Lindberg in the first round when the Brian Corradi and Danny Hood tuned hot rod laid down the quickest pass of the entire event with a 3.858-second pass at 329.58 mph to better Lindberg’s 3.943 at 323.19.

In the quarterfinal, Force was paired with teammate and regular season champion Robert Hight where the racing icon put down another impressive pass to take the win light. Force powered his PEAK Chevy to a 3.913-second pass at 326.95 mph while Hight ran only 13.016-seconds at 71.18 mph after smoking the tires off the starting line. The round win brought Force face-to-face with rival Matt Hagan in the semifinal where he continued the momentum with a 3.940-second pass at 330.88 mph. Hagan hazed the tires to cross the finish line at 13.019-seconds and 75.31 mph.

Heading to his ninth final round of the U.S. Nationals and third of the season, Force would be matched with No. 1 qualifier Jack Beckman. The pair of racing veterans left the starting line with almost identical reaction times, Force with a .079 and Beckman with a .072, but the 16-time world champion had the better race car. Force took the win with a 3.919-second pass at 324.44 mph over Beckman’s 3.940 at 325.92.

“Racing is what I love to do. Winning Indy is the biggest thing on my bucket list and I never thought I’d get the chance again. This is just incredible that someone my age could do this again. Don’t let anybody tell you you’re too old. Get up and stay alive, keep moving. I’m trying to fight the old man every day. You know I started hearing ‘you’re 70, this thing is over’ and its really true, it’s how bad you want it,” said Force. “This is a big moment for me. I’m having an emotional day because I won Indy. I owe this sport for so much. I love NHRA that has given me so much. It doesn’t matter what you do in life, you do it because you love it and I love it and when you don’t do good you do the best you can. This race really meant a lot to my girls, to my grandkids, a lot of my family was here.

“There are a lot of guys with a lot more talent than me. They just don’t have a race car with the money and the right crew chief, Brian Corradi, Danny Hood and Tim Fabrisi. I just happen to be one of the lucky ones,” Force continued. “I’m racing guys that are young. You know, I just love these people. Beckman, this guy’s the best out here on the tree. Robert Hight, I can’t beat him but he smoked the tires. It’s just like somebody wanted me to win this race.”

Austin Prock opened race day at the U.S. Nationals with a round one win over Richie Crampton when he launched his Montana Brand / Rocky Mountain Twist hot rod to a solid 3.712-second pass at 330.15 mph defeating Crampton’s 4.933 at 142.70. Coming into the quarterfinals with lane choice, Prock faced Mike Salinas where the pair both smoked the tires down track. The first-year driver was able to pedal his 11,000-horsepower machine to the finish line at 3.948-seconds and 304.39 mph out driving Salinas’s 4.082 at 222.62.

Heading to the semis, Prock competed against long time racer and eventual event winner Doug Kalitta. Prock smoked the tires off the starting line to run 8.991-seconds at 80.92 mph and fell short of his second final round appearance to Kalitta’s solid 3.766 at 328.22.

“We ended with another semifinal appearance for the second consecutive week to follow up that win in Seattle. I’m pretty proud of how things are going right now. I think if we can keep this pace up going to the semifinals and getting into the finals, we’ll be able to run for the Championship,” said Prock who clinched his spot in the Countdown to the Championship after Sunday’s qualifying. “We know we still have a little bit of work to do and Mike Green and Ronnie Thompson are hard at work at it. We’re going to get this thing sorted out and hope we go win in Reading.”

Robert Hight, the 2019 regular season champion, came into Monday’s eliminations in the No. 7 spot to race against Tim Wilkerson for the 50th time in his 15-year career. Hight improved to 29-21 over Wilkerson when he ran 3.891-seconds at 326.48 mph bettering Wilkerson’s 4.438 at 193.65 mph after pulling towards the center-line and having to lift off the throttle.

The first-round win would line Hight up with team owner and eventual event champion John Force. Hight ran into trouble at the start and was immediately off the throttle to record a 13.016-second pass at only 71.18 mph while Force drove away with a 3.913 pass at 326.95 mph.

“Well, I said I wanted one of the John Force Racing Chevy’s in the winner’s circle. Not how we wanted things to go, you never want to race your teammate unless it’s in the finals so I’m happy for John,” Hight said. “The points reset now, and this Auto Club team worked hard all season to be at the top of the Funny Car class heading into the Countdown to the Championship. I’m proud of them, Jimmy Prock and Chris Cunningham. We still have a good race car and we’re going to make a strong run for this championship.”

Sitting No. 1 with her track record elapsed time pass of 3.645-seconds, Brittany Force and the Advance Auto Parts team started race day lined up with T.J. Zizzo. Force would run her David Grubnic and Mac Savage tuned dragster to the quickest pass of the day, 3.701-seconds, at 327.66 mph to defeat Zizzo’s 3.801 pass at 323.12 mph.

Force would head into the second round with lane choice against veteran racer Doug Kalitta. Force had the lead until the eighth mile but dropped a cylinder late to cross the finish line at 3.761 and 322.19 mph and be outran by Kalitta’s 3.757 at 327.98.

“I’m feeling really confident leaving Indy this week and going into the Countdown with this Advance Auto Parts team,” Force said. “We had an awesome weekend; No. 1 qualifier, picked up some points. Came out first round, got past T.J. Zizzo and unfortunately second round we dropped a hole but still had a decent run. We’re four in points, Antron got us by one point, but we’ve got our race car back and I’m feeling good in the car.”

The NHRA Mello Yello Drag Racing Series Countdown to the Championship, NHRA’s six race playoffs, resets the points for the top 10 competitors in each professional category. The No. 1 seed will start with 2100 points and a 20-point lead over No. 2 who will have 2080. From the second position down to No. 10, the points difference between each will be 10 points giving the No. 10 seed a starting amount of 2000 points.

Robert Hight and John Force are two of only six drivers who have qualified for all 13 NHRA Mello Yello Countdown to Championships. Robert will start first with John in second. It is the third time John Force Racing has started the Countdown one and two, Force and Hight were one and two respectively in 2010 and 2014. Brittany Force has qualified for six consecutive years and will start from the No. 4 position, the same spot her father John started when he won his last championship in 2013. Austin Prock begins his first Countdown to the Championship from the No. 8 position.

The Countdown to the Championship begins with the Mopar Express Lane NHRA Nationals presented by Pennzoil at Maple Grove Raceway in Reading, Penn., taking place Sept. 12-15.