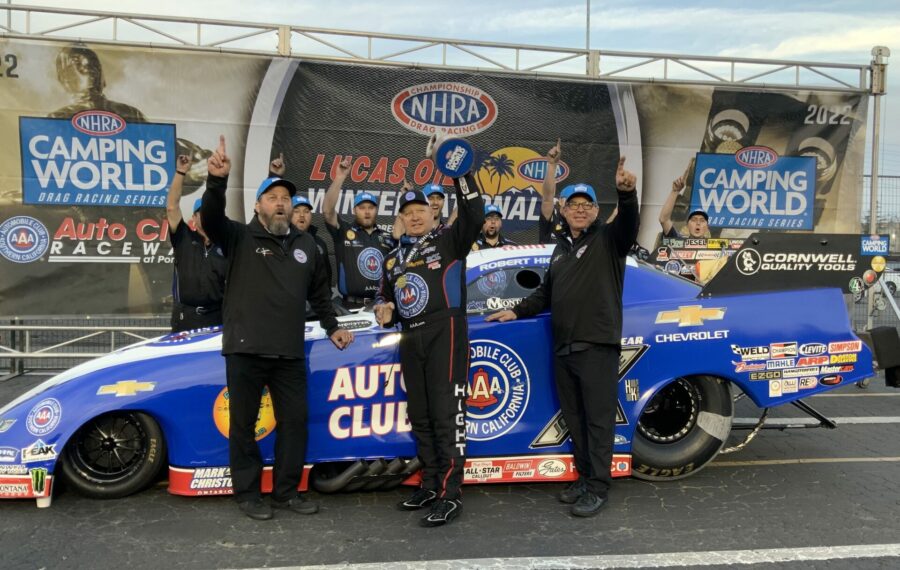 In the semifinals, Hight would match-up with Funny Car veteran Matt Hagan. The Auto Club Chevy had a clean pass of 3.861-seconds and 331.20 mph while Hagan would record only a 4.026 at 317.64. Hight would take on new team owner and reigning Funny Car world champion Ron Capps in the final round. Despite some extracurricular excitement on the starting line, Hight and Capps would have a stellar side-by-side drag race. Hight would edge Capps with a 3.861-second pass at 329.58 mph to Capps’ 3.882 at 333.82.

“It’s pretty tough,” said Hight about having to gain composure after his car body clipped the injector while being closed during pre-stage. “I saw Trevor (Huff) off to the side and he didn’t look like he was hurt. Trevor is all right. You’ve got a job to do so I just followed Jimmy (Prock) and he said to come on in and stage. You have to gather your thoughts. He put the body down and hooked the injector. Never had that happen. When the win light came on, the first thing I asked – I didn’t even care if we won – was whether he was okay.

“I knew it was going to be a great race against Ron Capps. If you looked at our last qualifying run last night, it was four thousandths apart (Capps in the other lane). It was neck and neck all day long. It’s one of many battles, the first race of the year. To get the job done is a big day. We’re going to have a lot more of those this year,” Hight said. “The guys have stayed focused, worked really hard. If you look at our runs in testing and our runs here, I think this Auto Club team has found it. I’m happy. We have more consistency than we had last year. I can only see it getting better.”

Austin Prock returned with a splash to the Top Fuel driver’s seat in the Montana Brand / Rocky Mountain Twist dragster. Coming in as the No. 4 qualifier, Prock would face Clay Millican in the first round. The Montana Brand / RMT dragster would go 3.725-seconds at 333.08 mph while Millican’s dragster ran into trouble with a 4.350 at 170.08. In the second round, Prock would march with eight-time world champion Tony Schumacher. Prock and his Joe Barlam and Rahn Tobler led dragster would go 3.780-seconds at 329.10 while Schumacher coasted to 8.516 at 74.03.

The quarterfinal win would put Prock against teammate Brittany Force in the semifinals. While Force would have a solid 3.700 at 328.06, Prock would lay down his best run of the weekend at 3.687-seconds and 331.36 mph. In the finals, Prock would face another young Top Fuel standout in Justin Ashley. Nearly identical off the starting line, Prock (.049 reaction time) would fall short with a 3.713-second pass at 333 mph while Ashley (.050 reaction times) would run 3.694 at 314.53 for the win.

“Great start to the year. This Montana Brand / Rocky Mountain Twist team got put together about 3-4 weeks ago and I thought we did an excellent job this weekend. No mistakes and tuners were learning every run and improving the car,” Prock said. “I’m really happy with how this year has started. It’s going to be a long, fun year and I’m really looking forward to it. It was cool to go against Brittany in the semis. From a team standpoint when you race each other in the semis it’s exciting because you know one of your cars is going to the final round. It was a great race. It was totally heads up, and a lot of fun. I’m glad I came out on the good side of it this time. Obviously, we wanted to get the win tonight, especially with my dad winning. It would have been awfully cool to have a family double up. I’m just happy to be back. This is my dream to drive this race car, and to be back and doing what I love again, it’s a lot of fun.”

“This Monster Energy / Flav-R-Pac team is off to a great start. We ran good during qualifying, got the number one qualifier, and made a semifinal round appearance,” Force said. “We have a great team around us with David Grubnic, Mac Savage and all our guys with two new additions. We’re working well together and I’m very proud of what we accomplished today. We have a really strong group and I feel positive going into this season. Great start and I’m excited to see what we can do in Phoenix next week. Coming into Pomona, I knew Austin and I were going to line up. His first season out we paired up first round of the opening race in Pomona, so I knew it was going to happen. I would have preferred for it to be in the finals but it’s just awesome to have him and his team out here. He’s pumped to be out here and it’s cool to have him in the lane next to me. If anyone’s going to beat me, I want it to be him.”

John Force has only qualified in the No. 16 position a handful of times, and for the first time, he matched with a first-round loss. The 16-time Funny Car world champion’s PEAK / BlueDEF Chevy struggled all weekend failing to make clean pass down track. The BlueDEF Platinum Chevy drove into tire smoke almost immediately in their first-round match-up against eventual event runner-up Ron Capps. Force would coast to a 10.412-second pass at 76.53 mph and watch Capps run 3.920 at 329.75.

The John Force Racing team will head back to Arizona for the NHRA Arizona Nationals at Wild Horse Pass Motorsports Park just outside of Phoenix in Chandler, Arizona, February 25-27.