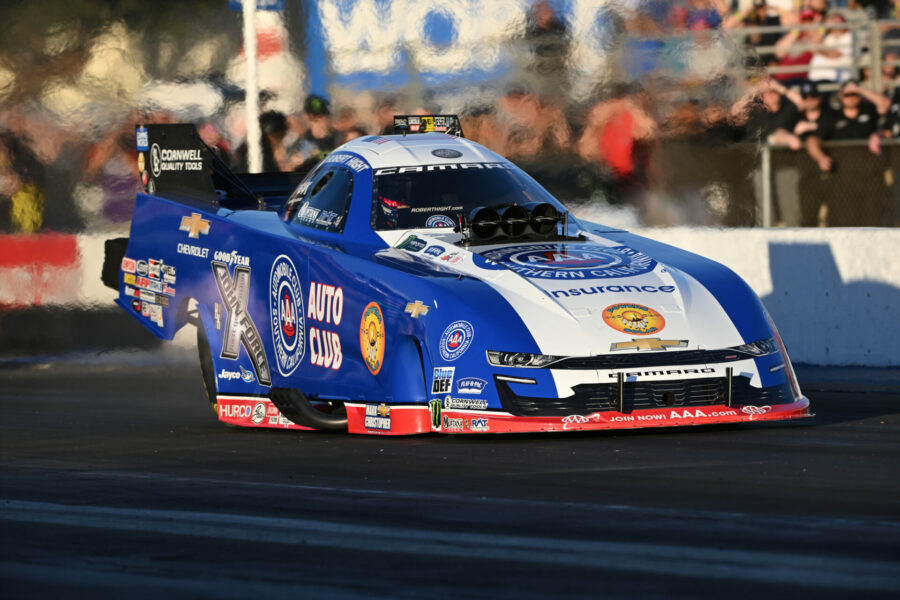 POMONA, Calif. (Feb 18, 2022) – Robert Hight and the Automobile Club of Southern California Chevrolet Camaro SS team are the provisional No. 1 qualifiers Friday at the Lucas Oil NHRA Winternationals at Auto Club Raceway at Pomona. Brittany Force handled the Monster Energy / Flav-R-Pac dragster to the No. 3 qualifying position and Austin Prock took the Montana Brand / Rocky Mountain Twist to No. 8 while John Force and the PEAK BlueDEF PLATINUM Chevrolet Camaro SS team did not record a time after making contact with the centerline and a timing block.

It should be no surprise that Robert Hight and his Jimmy Prock and Chris Cunningham led Auto Club Chevy team came out of the box swinging for the fences. After pushing the envelope at testing and being the first to lay down a full clean pass, being quickest of the night in their first qualifying attempt at Auto Club Raceway was to be expected. Hight handled his Auto Club Chevy to a stout 3. 3.882-second pass at 330.39 mph to hold off the 18-car Funny Car field.

“I’m very excited. We tested well last week so I couldn’t wait to get here and see if we could do it again at Pomona,” Hight said. “Jimmy Prock – you can tell when he’s confident. He’s not in that box all the time, he’s not making a lot of last-minute changes. He didn’t spend a lot of time back there tweaking things. He just went off what he had from Phoenix when we made a lot of good runs, and I think there’s more left so I’m looking forward to it. We’ve got to get one run at a time and four on Sunday and then we’ll be excited.”

Brittany Force, in her Monster Energy livery, closed out Friday night qualifying with a 3.722-second pass at a 332.10 mph, the fastest pass of the session and third quickest earning her a bonus qualifying point.

“First run of the season back in Pomona and we ran a 3.722 and we picked up a point. That’s a great way to start. We’ll just keep building on it for tomorrow and get ourselves ready for race day,” Force said. “I’m happy to be back with my entire Monster Energy / Flav-R-Pac team. It’s a new season, it’s a new start, and I’m really looking forward to seeing what we can do.”

Back in competition after nearly two years, Austin Prock, with his stand-out tandem of crew chiefs Joe Barlam and Rahn Tobler, made a promising pass of 3.794-seconds at 289.94 mph after the 2019 rookie of the year had a cylinder out and lifted off the throttle down-track.

“Overall, a pretty good start to the weekend. It’s been a while since I’ve driven one of these things, and this is the shortest shut down on the circuit, so you have to make sure you have the laundry out on time,” Prock said. “I lifted just at the 660-foot count so we were down on ET and mph a little bit but it was actually a blessing in disguise because we kicked the rods out of the thing. If we wouldn’t have had it drop a hole a 500-feet, it probably wouldn’t have flushed the bones out of it. Tomorrow we’ll have a decent baseline and go from there.”

Things got loose down track for John Force and the BlueDEF PLATINUM Chevy team. After leaving the starting line clean, the Chevy hotrod made a move to the centerline, crossing over and hitting a timing block, disqualifying his run.

“Well made a mess of that. It was moving all over the place. Luckily, we have two more runs tomorrow and we’ll make them count. I’m just glad to be back in a PEAK Chevy, glad to be starting the season,” said Force. “This BlueDEF team is working hard, we’ll be okay. Danny Hood, Tim Fabrisi, we’re looking good for this year. All of us are. Robert quickest with Auto Club, Brittany running good over there with Monster and the Prock kid getting things done with Montana Brand and Rocky Mountain Twist.”

Qualifying at the Lucas Oil NHRA Winternationals at Auto Club Raceway at Pomona continues Saturday with sessions at 12:30 and 4:30 p.m. Eliminations are slated for Sunday at 11 a.m. Television coverage of the season opening event will be aired on FOX Sports 1 (FS1) with a qualifying show on Sunday at 7 a.m. ET and eliminations on Sunday at 10 p.m. ET.