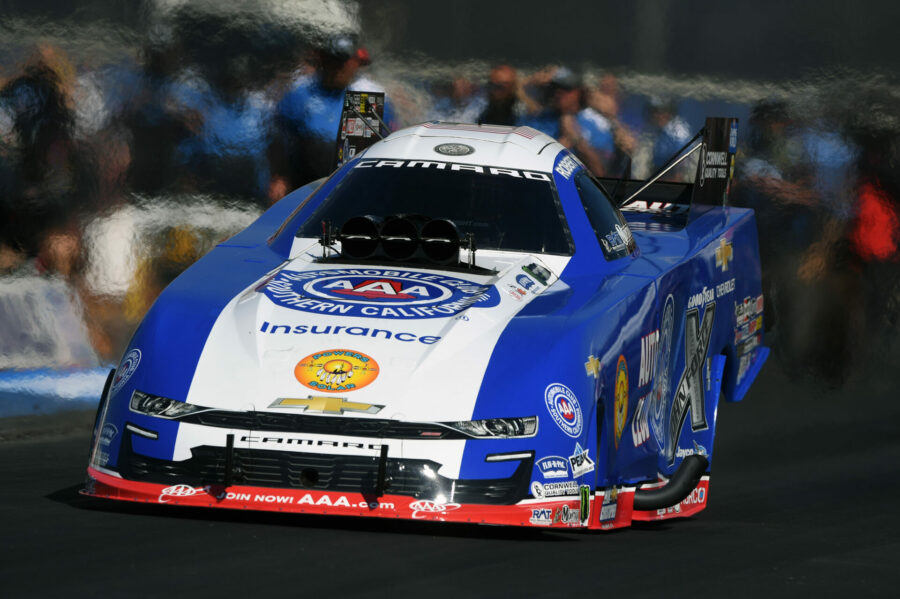 CHANDLER, Ariz. (Feb. 24, 2022) – Robert Hight and the Automobile Club of Southern California Chevrolet Camaro SS team are on top of their game as they head to the NHRA Arizona Nationals at Wild Horse Pass Motorsports Park Feb. 25-27. The Auto Club team enter the second of 22 events on the 2022 NHRA Camping World Drag Racing Series season riding the momentum of a win at Auto Club Raceway at Pomona.

It was a statement 54th career victory for Hight and the Auto Club team at the NHRA season-opening Winternationals after finishing 2021 unsatisfied in the No. 8 position. Now the points leader, Hight, with Jimmy Prock and Chris Cunningham at the helm of his Chevrolet, has already extended to 17 the number of seasons in which he has won at least one tour event. The three-time championship team heads to Wild Horse Pass Motorsports Park just two weeks after a successful pre-season test session at the facility that led to their victory last weekend.

“That wasn’t a lot of fun last year. Since Jimmy Prock came back, we’ve been in the thick of things every year. Won two championships, set records,” Hight said. “These Auto Club guys stayed focused, worked really hard in the off season and looked at what bit us last year. If you look at our runs in testing and what we did in Pomona, I think they’ve found it and they’ve fixed it. I’m happy. We definitely have more consistency than we had last year. I can only see it getting better.”

Hight has won at Wild Horse Pass Motorsports once in an all-JFR showdown with then teammate Mike Neff in 2012. He was the runner-up at Wild Horse Pass Motorsports Park in 2007, 2008 and 2014 and was the No. 1 qualifier in 2007 and 2019.  He earned the No. 1 spot in 2007 with a time of 4.636 seconds that remains the quickest ever at the quarter mile distance at which races were contested until June of 2008. In his most recent Arizona appearance in 2020, he qualified No. 3 before being upset in the first round.

“I feel really good about going to Arizona this weekend. It’s hard not to. We had a great test session here just a couple weeks ago and last weekend with the win,” Hight said. “We know it’s not going to be easy, going after wins and ultimately a championship. We have to work race by race, run by run. This Auto Club Chevy team is up to the task though. We’re on a mission, we’re focused and we’re going to do the best we can.”

Qualifying at the NHRA Arizona Nationals at Wild Horse Pass Motorsports Park begins Friday with the first session at 5 p.m. and continues Saturday with runs at 1:30 and 4:30 p.m. Eliminations are slated for 11 a.m. on Sunday. Television coverage will be broadcast on FOX Sports 1 (FS1) beginning with qualifying shows Saturday at 11 a.m. and 7:30 p.m. ET. Eliminations will air at 7 p.m. ET on Sunday.