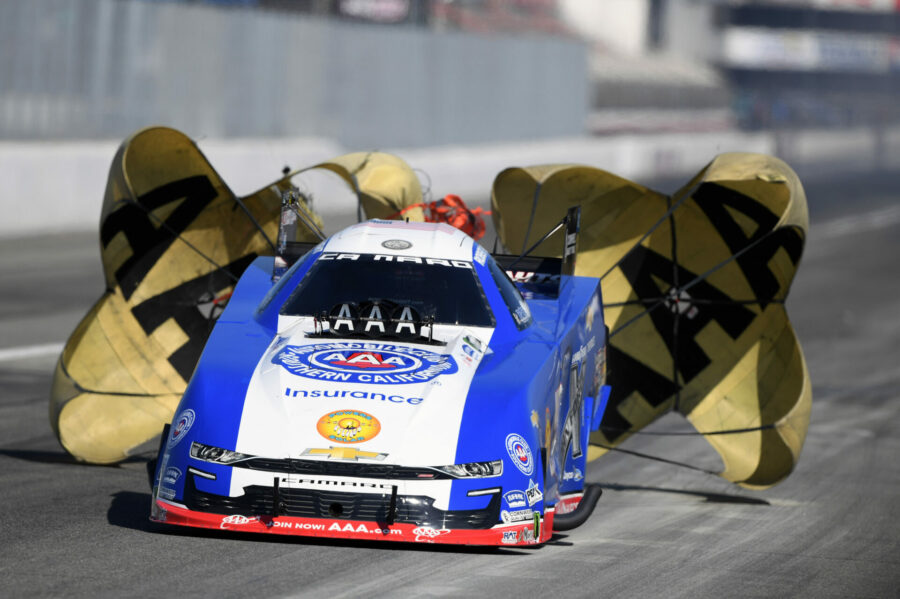 CHANDLER, Ariz. (Feb. 26, 2022) – Robert Hight and the Automobile Club of Southern California Chevrolet Camaro SS team were consistent throughout qualifying at the NHRA Arizona Nationals at Wild Horse Pass Motorsports Park to secure the No. 2 position on Saturday evening. John Force and the PEAK / BlueDEF PLATINUM Chevy are just behind Hight sitting No. 3. In Top Fuel, Brittany Force and the Flav-R-Pac / Monster Energy dragster improved to No. 6 while Austin Prock and the Montana Brand / Rocky Mountain Twist team are No. 11.

Hight and the Auto Club team continued to perform at a high-caliber Saturday going 3.848-seconds at 330.47 mph to be quickest of the session and gain three bonus qualifying points. In the final session, just after being bumped into the No. 2 spot, Hight would maintain his consistency to take the Auto Club Chevy to an impressive 3.839 pass at 333.00 mph that would come up second quickest for an additional two points. They’ll enter race day No. 2 off their Friday night 3.838-second run.

“I said I didn’t think that 3.838 from Friday was going to hold, but I’m proud of how this Auto Club Chevy is running,” said Hight who will face Paul Lee first round. “It’s all about being consistent. That’s how you win races and how you win championships. Right now, after these two weekends so far, we have the best of both worlds, quick and consistent. It’s a dream come true to drive a car like this. It’s been a while.”

“We’ll get it figured out. This PEAK team with Danny Hood and Tim Fabrisi. We’ll be okay. We’re in the show, might not have been pretty but we made it,” said Force who will line up with Jeff Arend first round. “We’re all in. Just going to keep fighting our way through. Robert looks good over there with Auto Club and Brittany with Flav-R-Pac and Austin with Montana Brand, the have Frank Tiegs here getting to see his cars run. We’ll put on a show tomorrow for all these fans that came out here.”

Brittany Force and the Flav-R-Pac dragster team improved Saturday going 3.694-seconds at 321.96 mph to start the day as the quickest of the pack and pick up three-bonus points. They would move themselves into the No. 3 position before putting a holeout in the third session and being bumped to No. 6.

“Wrapping up qualifying and ended up number six so, unfortunately, we face our teammate Austin Prock,” Force said. “Overall looking at the weekend, yes, we did struggle, but we also qualified No. 2 for the Pep Boys NHRA All-Star Top Fuel Callout that’s happening in Gainesville in a couple weeks so that’s good news. Even though we struggled, anything can happen. I’ve got a solid team with David Grubnic and Mac Savage. We have some things to work out, and I’m hoping we can do that tomorrow first round and have a long race day.”

“This Montana Brand / Rocky Mountain Twist team struggled the first two runs this weekend,” Prock said. “We made a decent last one, but we destroyed pretty much every component on the race car, so we’re pretty frustrated with that. But we’ll be here late tonight and be ready to go in the morning.”

Eliminations at the NHRA Arizona Nationals at Wild Horse Pass Motorsports Park are slated for 11 a.m. on Sunday. Television coverage of eliminations will be broadcast on FOX Sports 1 (FS1) and air at 7 p.m. ET on Sunday.