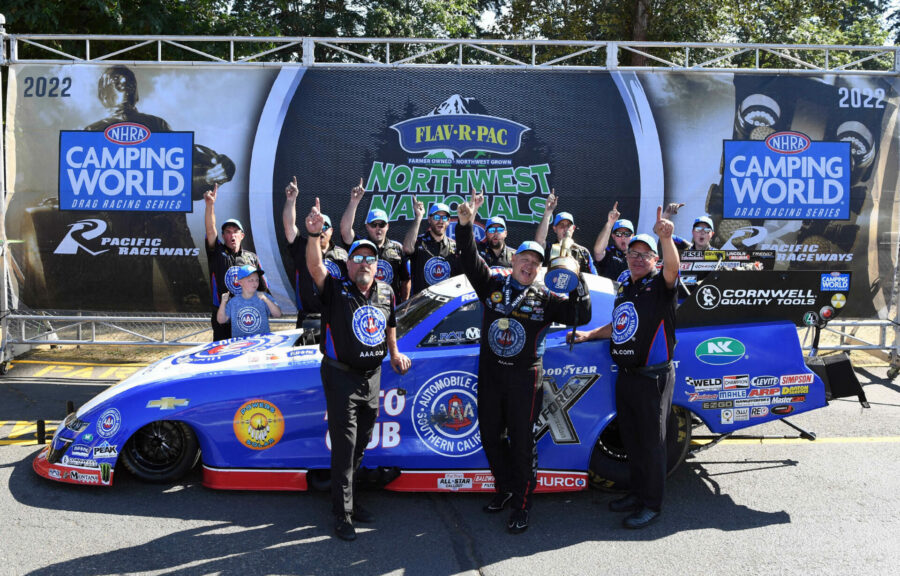 KENT, Wash. (July 31, 2022) – Robert Hight landed the Automobile Club of Southern California Chevrolet Camaro SS Funny Car in the winners circle for the sixth time this season Sunday at the Flav-R-Pac NHRA Northwest Nationals at Pacific Raceways. Brittany Force and the Flav-R-Pac / Monster Energy team had their 33rd career final round appearance, John Force took the PEAK Antifreeze and Coolant Chevy to the semifinals and Austin Prock and the Montana Brand / Rocky Mountain Twist dragster had a first-round exit.

Robert Hight’s 59th career victory is his second at Pacific Raceways and matches his career best season that came in 2019 (six wins and a championship), with still nine races left in the 2022 NHRA Camping World Drag Racing Series season

Robert Hight with the Auto Club Chevy and John Force with the PEAK Chevy both opened up race day with monster matchups. Hight would take on reigning champion Ron Capps while Force would battle it out with Funny Car veteran Matt Hagan.

“Good weekend for this PEAK Chevy, we got to running well, had to do some driving but we got the job done, went some rounds,” Force said. “Really good weekend for Frank Tiegs with Flav-R-Pac, his car went No.1 and made it to the finals, they’re running well and I think everyone was expecting them to win it. In the points lead with plenty of races left to get the job done but Robert got it done today with that Auto Club team. Austin was looking good over there with Montana Brand too.”

In his 92nd career final round appearance, Hight and his Jimmy Prock and Chris Cunningham tuned Auto Club Chevy would prevail in a stout side-by-side run with Todd. It would be Hight and his Camaro to the finish line first with a 3.975-second run at 319.98 mph outdoing Todd’s 3.978 at 324.75.

“We weren’t the best car in qualifying, but we had to be on our game today,” Hight said. “We had the best elapsed time every round and that’s big. We’ve been good when the conditions were cool. Up until a couple of races ago, this Auto Club Chevy we didn’t have a hot weather setup, so I’m proud of what these guys did in the heat. It’s amazing to have six wins at this point in the season. I’m blown away, the whole team have pulled together,” Hight said. “I love it here in Seattle and it was great to be back, and we capitalized when we needed to. From top to bottom, this four-car (John Force Racing) team has been great. Everyone is pulling in the same direction and as a driver, that gives you a lot of confidence. We’re very hopeful we can keep this going, but we just have to continue to stay focused and working toward our goal.”

In her 33rd final round appearance, Force faced the winningest NHRA Top Fuel driver, Tony Schumacher. The Flav-R-Pac dragster would have issues early going up in tire smoke before having to click it off early for only a 5.145-second pass at 153.14 mph. Schumacher started to lose traction and put holes out but ultimately held on for 3.977 run at 251.34 and the win.

“It was a great weekend for this Flav-R-Pac team running at the first ever Flav-R-Pac Northwest Nationals. I’m very proud to be teamed with a company like Flav-R-Pac. I was excited to see their colors painted all over the drag strip this weekend,” Force said. “We had an awesome weekend – we qualified No. 1 and had a final round appearance. We stayed in the points lead, and that’s the most important thing. We’ll head to Topeka next.”

Austin Prock and the Montana Brand / RMT dragster made their best run of the weekend at 3.796-seconds and 326.32 mph but it would come up just barely short of a first round victory against Justin Ashley. Prock would leave first but Ashley would cross the finish line at 3.782 and 325.30 to advance.

“This Montana Brand / Rocky Mountain Twist team got beat in a close race today. We made a bunch of ground this weekend, though, just came up short in the first round,” Prock said. “It wasn’t the Western Swing we anticipated but I know we’re moving forward. We’ve got a week to polish this hotrod up and come out swinging in Topeka.”