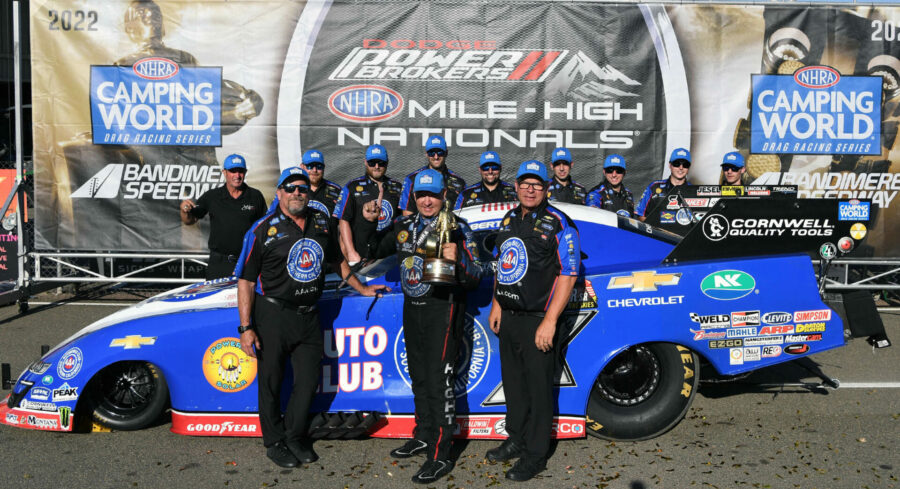 MORRISON, Colo. (July 17, 2022) – Robert Hight and the Automobile Club of Southern California Chevrolet Camaro SS team tallied their fifth win of the season Sunday at the Dodge Power Brokers NHRA Mile-High Nationals at Bandimere Speedway. The victory marks Hight’s fifth at the facility dubbed “Thunder Mountain” and the 58th of his career.

Robert Hight and the Auto Club Camaro landed the first-round win against Terry Haddock with a 4.035-secodn pass at 319.07 mph to Haddocks 4.394 at 229.98. Hight would then line-up with Funny Car veteran Tim Wilkerson in the second round. Hight would be on a clean run and despite slowing near the finish line, would hold on for the win with a 4.253-second pass at 260.76 mph. Wilkerson would get out of the groove and hit the finish line cones recording a 4.408 losing pass at 208.07 mph.

For the 61st time in their careers, Hight would compete against boss John Force. Hight improved his record against the 16-time champ to 32-29 with a hole shot victory. Leaving the startling in .056-seconds to Force’s .112, the Auto Club Camaro would cross the line at 4.041 at 315.56 to send Force’s 4.033 at 322.96 packing and set the stage for Hight’s final round against Bob Tasca III.

In a repeat of the Norwalk, Ohio finals, Hight would have the starting line advantage and never trail with a clean solid pass at 4.065-seconds at 311.92 mph bettering Tasca’s 4.263 at 272.89 after he had to pedal to the finish line. Hight is now 31-10 against the longtime rival, 3-0 in final rounds.

“Things are really going our way right now, but there’s still a lot of real good race cars out there. I want to give all the credit to the Auto Club team. Last year was our worst year on the mountain and maybe ever. We couldn’t even get down the track. Jimmy Prock and Chris Cunningham have had a year to digest that. This year, we made quality runs and went down the track every time. We made a lot of great runs and I was confident my guys had this Chevy Camaro Funny Car figured out. Jimmy and Chris, they raced smart today, they didn’t push it too hard, just raced really smart. They made it go down the track and let me do my job,” Hight said. “To have five wins at this point in the season, it’s surreal. Everything is working from top to bottom and we’re just going to try to stay focused and keep working. It’s been a great first half of the season, but these next 11 are going to be even tougher.”

“As a team owner, as part of a team, anytime you come out of the day with someone in your camp winning, it’s a good day. Robert and that Auto Club team they’re on a roll, they’re the team to beat. But this PEAK team, we’re getting there, we’re right there. We’ve been consistent. Danny Hood and Tim Fabrisi, all these PEAK guys, they are working hard to get the job done and I just need to keep doing my job too.”

Austin Prock was quicker on the starting line with a .065-second reaction time to Steve Torrence’s .226 to take the first-round victory over the four-time champion. Prock would handle the Montana Brand dragster to a 3.929 at 299.53 after it spun the tires down track to send Torrence and his 3.869 at 316.75 home on a hole shot in the first round. Prock would not be so lucky in the second round. Running against Justin Ashley, Prock had to pedal the Montana Brand dragster to a 4.721-second pass at 194.60 mph that wasn’t quite enough for Ashley’s 4.144 at 291.63 mph.

“Not the day this Montana Brand / Rocky Mountain Twist team wanted, but we learned. Our car is close and just needs a few small changes and we can be dangerous. I made some progress in my department as well, I felt satisfied with my performance this weekend, which I haven’t in a while,” Prock said. “I have a good feeling about Sonoma. I’m glad my dad and Hight were able to make the day worth it, especially with NK Seeds and Frank Tiegs in attendance. We will celebrate their win for the John Force Racing team and get it done next weekend.”

“Challenging weekend for our Flav-R-Pac team here at Bandimere Speedway. We struggled Friday qualifying and had some breakage on Sunday in the second round of eliminations. We still kept ourselves up in the points and brought home our fourth No. 1 qualifier of the season. Lucky for us we head straight to Sonoma for number two on this Western swing.”