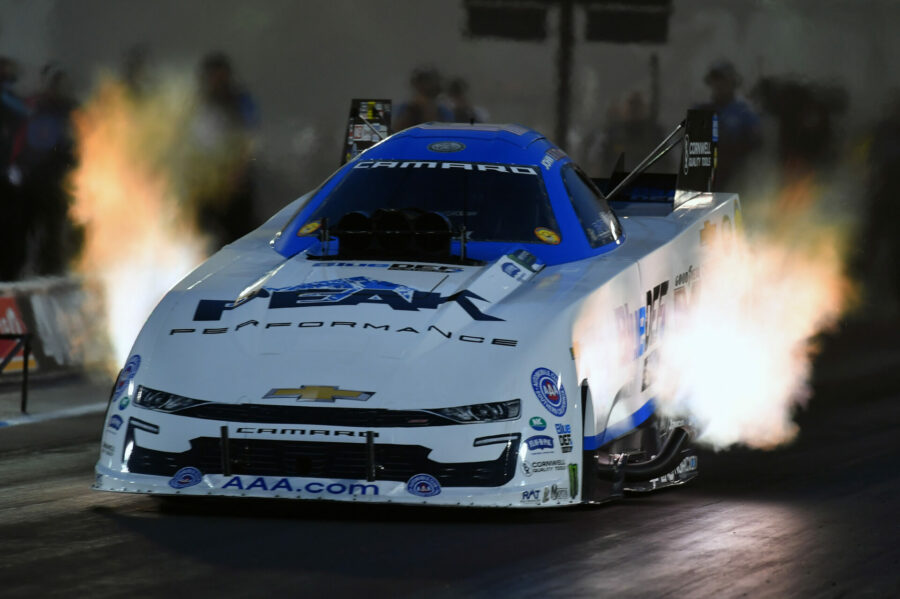 CONCORD, N.C. (April 29, 2022) – John Force and the PEAK / BlueDEF PLATINUM Chevrolet Camaro SS Funny Car are set the tone Friday at the Circle K NHRA Four-Wide Nationals with a record setting provisional No. 1 qualifying run. Brittany Force in the Flav-R-Pac / Monster Energy dragster along with Robert Hight in the Automobile Club of Southern California Chevrolet Camaro sit seventh in their respective categories and Austin Prock in the Montana Brand / Rocky Mountain Twist dragster are No. 8.

Defending event winner John Force opened qualifying at the NHRA Four-Wide Nationals with a statement pass of 3.858-seconds at 333.25 mph in his PEAK / BlueDEF Chevy that earned him three bonus points for being quickest of the session. Already in the No. 1 spot, Force and his Danny Hood and Tim Fabrisi tuned Camaro solidified their position setting both ends of the track record with a 3.850-second pass at 334.24 mph. Force takes the track record elapsed time from daughter Courtney Force who went 3.851-seconds in April 2017.

“We’re always looking for consistency and we had that today. We ran that 3.85 and I went back and spoke to crew chief Daniel Hood, my son-in-law, and I said, ‘I kind of thought you were going to calm this down and see what it can do and get us in the show?’ And he said, ‘Well I did calm it down but it just ran.’ He backed it down even more in that second session but the conditions were good and it went even quicker,” said Force. “At least we’re finding something and I’m excited for him. My grandsons, Jacob and Noah, are home watching with my daughter, Ashley, and you know, as drivers, we get all the pats on the back but Danny and Tim Fabrisi, they work hard and they had this BlueDEF Chevy straight as an arrow. I was waiting, thinking it might get loose somewhere and move around, but boy, it stuck. That Chevy has really got some good aerodynamics. That Camaro is really good. It doesn’t move around much. It was like power steering. I didn’t have to do anything, I let it take me. And that’s when it’s at its best.”

Robert Hight and the Auto Club Chevy will start Saturday from the No. 7 position after coming out of the box with a 3.905-second run at 326.00 mph. Their second go at zMAX Dragway would have them running into tire smoke to go only 7.310 at 89.89.

“Not what we wanted to do in that second session. Off to a rough start but with two more runs tomorrow I know Jimmy Prock and Chris Cunningham will have this thing figured out,” Hight said. “This weekend is tricky weather conditions and running on a track where two of the lanes haven’t seen much action is an added obstacle. Everyone is in the same boat so we’ll just have to come out tomorrow and take it one run at a time all the way through to race day.”

Coming off back-to-back wins, Brittany Force, in her primary Flav-R-Pac livery, would start Friday qualifying with an impressive 3.725-second run at 332.92 mph and be second quickest of the pack for two bonus points. The Flav-R-Pac dragster wouldn’t improve in the second session with a 3.730 pass at 329.91 mph putting them in the No. 7 spot with two runs left on Saturday.

“Feels good to be back for some Four-Wide racing this weekend in Charlotte. Unfortunately, we’re off to a bit of a slow start,” Force said. “After two qualifying runs our Flav-R-Pac / Monster Energy team sits seventh after our 3.71 from the afternoon. We get two more shots tomorrow and we’re hoping to step up our game to prepare us for raceday.”

Austin Prock took the Montana Brand / RMT dragster on a solid 3.725-second pass at 330.31 mph that, based on speed, had him third quickest in the first qualifying session. Things wouldn’t go quite as planned for Prock in the second try, he would shut the Montana Brand dragster off early to coast to a  6.094 at 101.05.

“This Montana Brand / RMT team had a good start to the weekend. We rolled out of the box with a 3.725 and had to sit in third after the first run. During the second run, the track just got tricky. We were sitting there for so long – we had two oil downs in front of us, so I feel like we didn’t really do anything wrong,” Prock said. “The driveshaft looked exactly how it needed to, it just didn’t hold on. These night runs are fun to go out there and haul ass and put a number up on the board but it’s really going to count in the heat tomorrow. So, we should be fine.”

Qualifying at the Circle K NHRA Nationals at zMAX Dragway continues Saturday with sessions at sessions at 1:15 p.m. and 4:45 p.m. Eliminations are slated to begin Sunday at noon. For television coverage, tune into FOX Sports 1 (FS1) at 11 a.m. ET for on Sunday for qualifying and, for eliminations, Sunday at 7 p.m. ET.