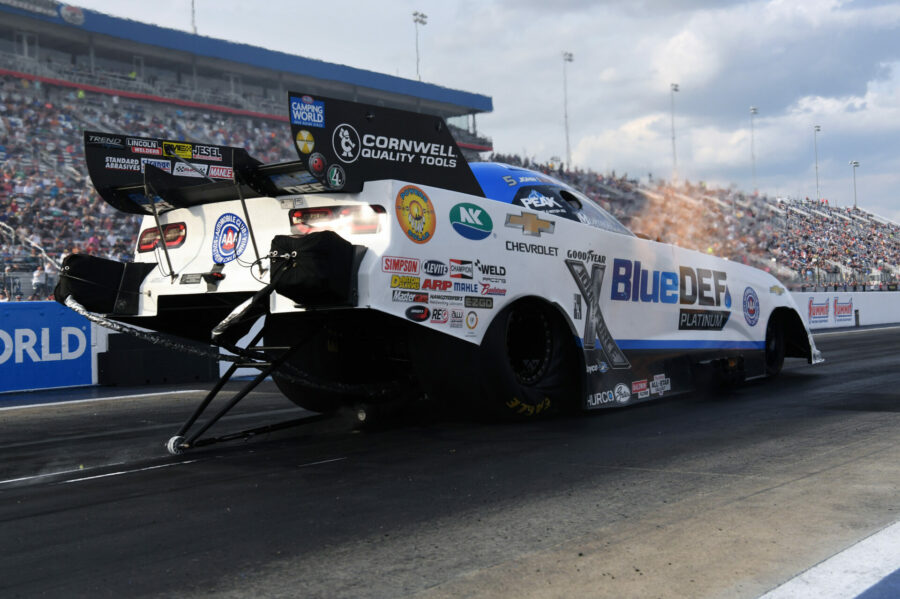 CONCORD, N.C. (April 30, 2022) – Much like they did in 2021, John Force and the PEAK / BlueDEF PLATINUM Chevy Camaro SS team will enter race day at the Circle K NHRA Four-Wide Nationals at zMAX Dragway as the No. 1 qualifiers. Robert Hight and the Automobile Club of Southern California Chevy will start from No. 4 while Brittany Force with Flav-R-Pac / Monster Energy and Austin Prock with Montana Brand / Rocky Mountain Twist will start No. 7 and 8, respectively.

Despite turning off early in his first run on Saturday to go only 4.910-seconds at 155.87 mph, John Force and the PEAK / BlueDEF Chevy laid down a solid 3.898-second pass at 331.94 mph to close out Four-Wide qualifying. Off the efforts of their Friday night record setting 3.850-second pass at 334.24 mph, they’ll enter race day from No. 1 for the 164th time in Force’s career. The 16-time champion along with crew chiefs Danny Hood and Tim Fabrisi are hoping to repeat history from just a year ago when they secured the No. 1 qualifier and then went onto win the event.

“I feel good because that’s three out of four runs this PEAK Chevy has gotten down there and we’ve got a little bit of consistency. That’s what this team is looking and I’m trying to find myself on the Christmas tree. That’s always a job for me. I’m a mood swinging person and I’ve got to keep a lid on it. So good day for the sponsors and let’s see where tomorrow goes. We’ve got a shot tomorrow. Anybody does – you can have the best car and loose and you can have the worst car and win, because I’ve proved it,” Force said. “Let’s keep this sport alive. That is my ultimate goal. People ask me what I’m trying to accomplish; I want my grandkids, if they wish, to see what I’ve loved for over 40 years of my career. I just love it out here.”

Robert Hight and the Auto Club team laid down their best run of the weekend Saturday evening when they went 3.876-seconds at 329.99 mph to jump from the No. 7 to No. 4 in the qualifying order. Hight previously went 4.860 at 160.88 Saturday afternoon.

“Not the best but not the worst qualifying effort for us. I think we have a handle on things, it’s hard to worry when you have Jimmy Prock and Chris Cunningham tuning your car,” Hight said. “We’ve had luck here before; this Auto Club Chevy has seen the winner’s circle in Charlotte and we want to see it again. We’ll just take it one run at a time, get some win lights and see what happened.”

Brittany Force and the Flav-R-Pac team opened Saturday up with a 3.716-second pass at only 303.57 mph after dropping cylinder down track. While the David Grubnic and Mac Savage tuned team improved their performance, they did not move up. In their final qualifying try, the Flav-R-Pac dragster would immediately run into tire smoke to coast to a 9.975 run at 88.16 keeping them No. 7.

“Coming off two wins in Vegas and Houston, we got off to a slow start here at zMAX Dragway in Charlotte. We ended up qualifying number seven and I think it’s the toughest place we’ve been looking at qualifying this season,” Force said. “We have our work cut out for us tomorrow but it’s four-wide and anything can happen. We’re going to throw down and see if we can step this Flav-R-Pac / Monster Energy dragster up and go three rounds tomorrow.”

Austin Prock and the Montana Brand / RMT team had cylinders out on Saturday afternoon but still managed to run 3.787-seconds at 315.65 mph. It would be their last qualifying try that secured them their No. 8 position. Prock would handle the Joe Barlam and Rahn Tobler tuned dragster to a 3.719-second pass at a track record 333.58 mph.

“We had a good finish to our qualifying here in Charlotte. We ended up going second or third quickest and set the track speed record. That’s the second time I’ve done that in my career – here and then Dallas in 2019,” Prock said. It’s always cool to get a record on your resume. We’re shaping up to have a good day tomorrow. I’m feeling more comfortable in the car so hopefully we can go some rounds tomorrow.”

Eliminations at the Circle K NHRA Four-Wide Nationals at zMAX Dragway are slated to begin Sunday at noon. For television coverage, tune into FOX Sports 1 (FS1) at 11 a.m. ET for on Sunday for qualifying and, for eliminations, Sunday at 7 p.m. ET.