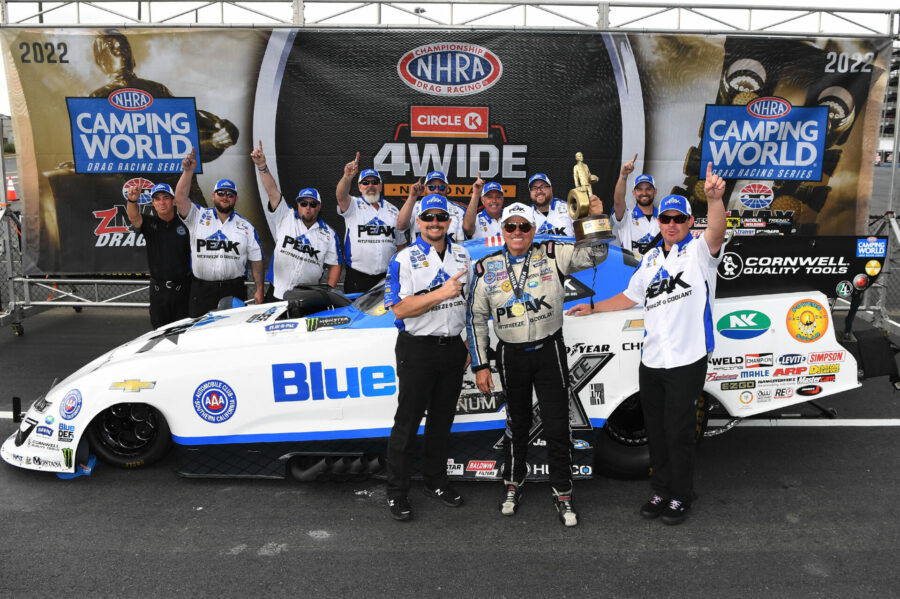 CONCORD, N.C. (May 01, 2022) – John Force and the PEAK / BlueDEF PLATINUM Chevrolet Camaro SS team dominated the Circle K NHRA Four-Wide Nationals at zMAX Dragway. After securing the No. 1 qualifying position and setting both ends of the track record, Force, the defending event winner, rallied to his 155th career victory, first of the season and third in the zMAX Dragway Four-Wide.

Robert Hight and the Automobile Club of Southern California Chevy finished as runner-up to Force and the PEAK team. On the dragster side, Brittany Force and the Flav-R-Pac team exited in the second round while Austin Prock and the Montana Brand / Rocky Mountain Twist team went out in the first round.

Robert Hight and the Auto Club team left nothing to chance in their first quad, laying down a 3.880-second pass at 332.67 mph to better Cruz Pedregon, who would also advance, Tim Wilkerson and Jim Campbell.

In the second quad, Force and Hight would line up with Tasca III and Cruz Pedregon. Force would handle the PEAK Chevy to a 3.934-second pass at 328.62 mph that was only bettered by Hight and the Auto Club Chevy’s 3.902 at 329.83. The John Force Racing teammates would face Mike McIntire Jr. and Ron Capps in the final quad.

Force would leave the line first and go straight down the groove as the BlueDEF Camaro crossed the finish line at 3.914-seconds at 328.86 mph. In the Auto Club Camaro, Hight would have issues down track and have to slow going 4.038 at 267.85 for the runner-up finish.

With the victory, Force now has more four-wide wins than any other Funny Car driver and is tied at three with Erica Enders for second most overall behind Steve Torrence who has six. This is now the 34th season in which Force has won at least one race.

It was the 52nd one-two finish for John Force Racing and the third time drivers have finished first and second in a four-wide.

“It was a great day for John Force Racing. Any time you can get two cars to the final, it’s a good day. If this Auto Club Chevy team is going to come up short, I’d rather it be to John and that PEAK Chevy than anyone else,” Hight said. “Ran into some issues there at the end that we’ll get figured out and be ready to come do it all again out in Richmond.”

“It was a tough weekend here in Charlotte. This Flav-R-Pac team came in here with back-to-back wins and just had that momentum moving forward. We went out qualified seventh, and it was a tough position to be in,” Force said. “We got past first round but in that second round we got beat and had to pack up early. It was still a good weekend for the John Force Racing teams with my dad winner and Robert getting the runner-up.”

Austin Prock and the Montana Brand / RMT dragster had a short race day at zMAX Dragway. The No. 8 qualifiers, who saw improvement through Friday and Saturday, were on a good pass until mid-track when something blew and disturbed the timing blocks. The NRHA relied on a photo finish that clearly put Prock finishing third despite no official time. Justin Ashley and Cameron Ferre advanced while Antron Brown was also out in the first round.

“It was a frustrating way to end our weekend. I felt like we had a competitive car all weekend and I was hoping it would all come together this morning, but it didn’t,” Prock said. “First round losses are always tough to swallow, especially because we all had high expectations going into this morning. It was a tough break but luckily, we get to play again in Richmond. I think the team is definitely on the right track. We just have to get our ducks in a row, and we should be fine.”