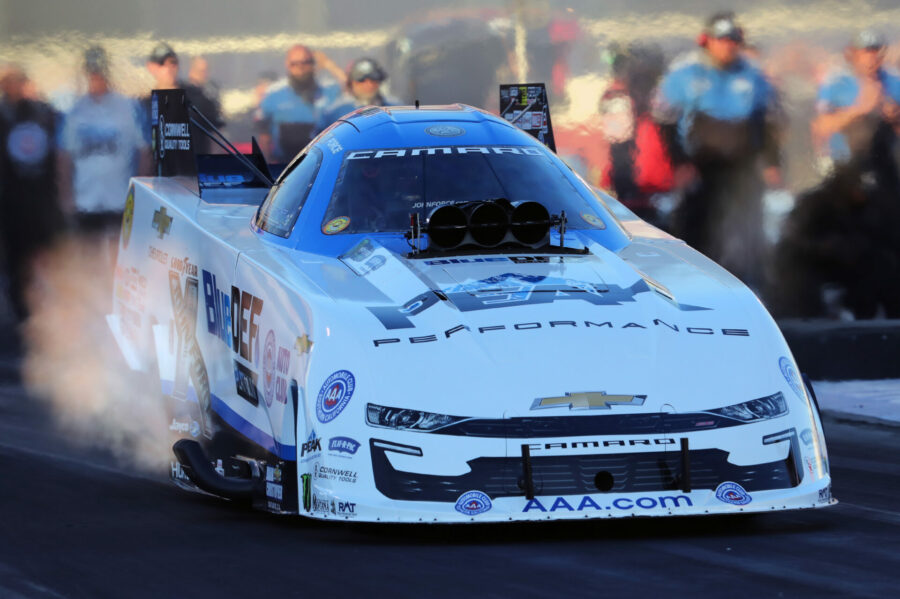 CHANDLER, Ariz. (Feb 24, 2022) – Now in his 47th career NHRA season, John Force and his PEAK / BlueDEF Platinum Chevrolet Camaro SS team enter this weekend’s Arizona Nationals optimistic as they head to a track at which Force has unprecedented success.

qualified 16th and had a first-round exit, Force and his PEAK / BlueDEF PLATINUM Chevy team will try to get back on track at Wild Horse Pass Motorsports Park, a track on which he was quickest in pre-season testing just two weeks ago.

“Pomona, home track, that was difficult. Not the showing we wanted but as a team owner, it was a good weekend, Brittany with Flav-R-Pac and Monster No. 1, Robert and Auto Club with the win and Austin getting Montana Brand into the finals,” Force said. “This PEAK BlueDEF team, we know we’ll be okay. Something just didn’t quite add up in Pomona, but I know Danny Hood and Tim Fabrisi, they have this Chevrolet dialed in. We showed what we could do at testing. So, I’m not worried. I’m excited.”

“A lot of good racing at Wild Horse Pass Motorsports Park,” Force said. “I’m looking forward to seeing the fans, we haven’t had the chance to put on a show for them in two years. It’ll be good to be back. We’ll put on a show and hopefully get this PEAK Chevy in the winner’s circle. It’s the plan, it’s always the plan, just gotta go out there one run at a time and get it done.”

Qualifying at the NHRA Arizona Nationals at Wild Horse Pass Motorsports Park begins Friday with the first session at 5 p.m. and continues Saturday with runs at 1:30 and 4:30 p.m. Eliminations are slated for 11 a.m. on Sunday. Television coverage will be broadcast on FOX Sports 1 (FS1) beginning with qualifying shows Saturday at 11 a.m. and 7:30 p.m. ET. Eliminations will air at 7 p.m. ET on Sunday.