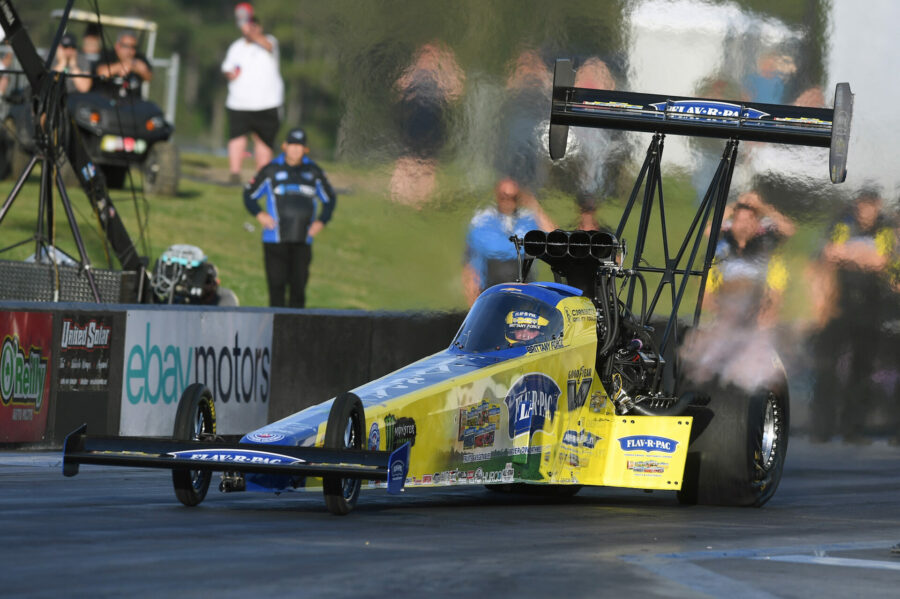 DINWIDDIE, Va. (May 14, 2022) – It was a battle between the John Force Racing Top Fuel dragsters on day two of the Virginia NHRA Nationals at Virginia Motorsports Park. Brittany Force and the Flav-R-Pac / Monster Energy team would prevail setting the track record ET for their second No. 1 of the season. Austin Prock and the Montana Brand / Rocky Mountain Twist team would have to settle for No. 2. In Funny Car, Robert Hight and the Automobile Club of Southern California Chevrolet Camaro SS would improve to No. 10 while John Force and the PEAK / BlueDEF PLATINUM Chevy would end up No. 12.

Coming into the day already in the No. 1 spot, Brittany Force and the Flav-R-Pac team had been shifted down to No. 7 before they laid down a blistering 3.669-second pass at 334.98 mph to set the track ET record and take back the No. 1 position. In their final qualifying try, with nothing really to prove, Force and her David Grubnic and Mac Savage tuned Flav-R-Pac dragster set the track record ET for the third time when they blasted to a 3.654 at 333.33.

“That was outstanding for this Monster Energy/Flav-R-Pac team, improving and improving with each run,” said Force who has a bye in the first round. “Now the hard part is doing that tomorrow (during eliminations). That’s going to be the tough one, but as long as we can make some consistent runs all day tomorrow, I think we should be good. I have confidence in this team and confidence in myself in getting down this track. This is one of the best tracks we’ve been one. It’s smooth and it felt fast, so we were really happy with it.”

After making a clean bassline run on Friday afternoon, Austin Prock and the Montana Brand / RMT team brought their A-game to temporarily set the track ET record and earn the No. 1 spot with a career best 3.672-second run at 326.87 mph. Prock would end the second qualifying session in the No. 2 spot and hold on despite shutting off early in the third session to coast to an 8.596 at 76.77.

“It’s been a great weekend in Richmond so far. This Montana Brand / Rocky Mountain Twist team is really coming along nice. I watched the team service, and they look like a well-oiled machine, the crew chiefs have that confidence in their eyes,” said Prock who will face Lex Joon round one. “I’m excited for tomorrow. We ran a career best this afternoon. It was an impressive run. To top it off, the JFR dragsters are sitting No. 1 and 2 rolling into Sunday, giving us a chance to meet in the finals.”

Robert Hight and the Auto Club team improved in their second qualifying run despite running into tire smoke. Hight pedaled his way to a 5.623-second pass at 135.41 mph and would stay No. 12. In the final session, Hight would improve once again improve despite not making a clean pass at 4.017 at 270.64 to settle into the No. 10 position.

“Bit of a rough start to the weekend but only tomorrow matters,” said Hight who will race Tim Wilkerson round one. “Tomorrow everything is different, the weather, the conditions, everyone will be in the same situation and I’m confident this Auto Club team will be ready to go. We’ll just get out there and try to turn on some win lights to end up in the winner’s circle.”

“Well tomorrow is race day, it’s when it matters. We’ll be ready to go,” said Force who runs J.R. Todd to open eliminations. “Those dragsters are running well, Brittany with Flav-R-Pac and Prock out there with Montana Brand. Conditions will be different tomorrow, it will be warmer, humid. So it will be something new from what we’ve seen all weekend. We’ll just have to get out there and go some rounds and see how it goes.”