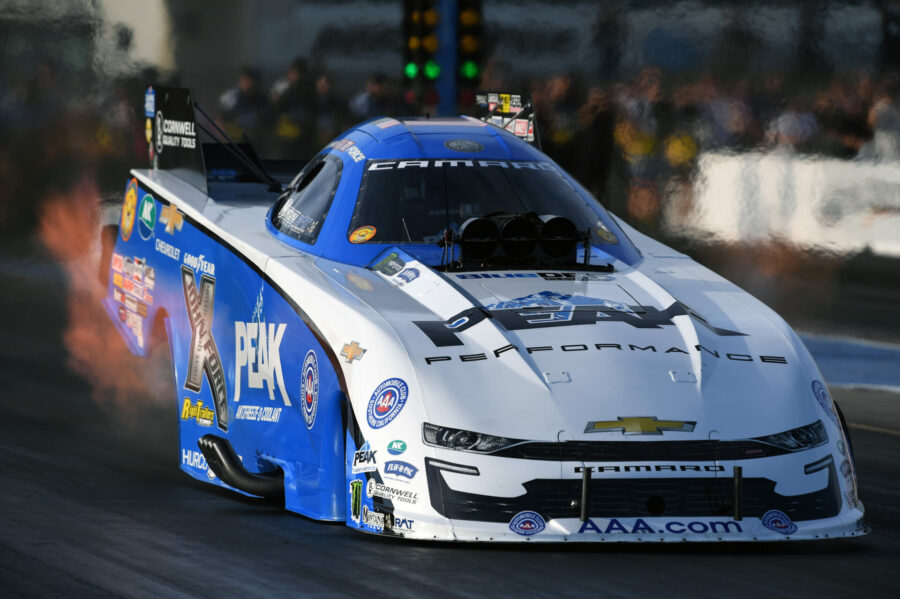 Robert Hight and the Auto Club team have no issues during their second qualifying run going 4.023 at 314.83 mph, the quickest of the Funny Car pack in the heat of the day. The Auto Club Camaro continued on-trend going 3.964 at 320.89 and ended the session as the second quickest. Hight picked up a total of five bonus points for his performance on Saturday and enter race day from No. 2 to face Jim Campbell in the first round.

“Really good day for the Auto Club team. This combination has really been good for us. Jimmy Prock and Chris Cunningham, they’ve figured it out in the heat. We’ve been consistent,” Hight said. “It’s hard not to be confident heading into tomorrow. The competition in Funny Car is so close though, we can’t let up. We have to strive for perfection and these Auto Club Chevy guys, they’re up for it.”

The PEAK Chevy looked good on its second qualifying try, Force went 4.066-seconds at 303.78 mph, third quickest of the Funny Car session. Crew chiefs Tim Fabrisi and Danny Hood tuned the PEAK Camaro to another solid 3.995 run at 317.94 to close out qualifying at Heartland Motorsports Park. Qualified No. 3, Force will race against Cruz Pedregon in the first round, it is the 116th time the two have faced each other.

“Good day for this PEAK Chevy team. Hot out here in Topeka but everyone is dealing with it and we’re getting down there, putting on a show for all these fans that sat through the heat,” said Force who officially clinched his spot in the NHRA Countdown to the Championship. “We look good for tomorrow, after running well today, Danny and Tim, they’re giving me a good race car. Just need to go out there and take it one run at a time and see how it goes.”

Brittany Force and the Monster Energy team have the second quickest run in the heat of the day on Saturday. They go 3.865-seconds at 300.13 mph to pick up two qualifying bonus points despite putting a cylinder out and shutting off slightly early. The David Grubnic and Mac Savage tuned Monster Energy dragster would maintain their performance in the final qualifying session going 3.800-at 322.65 to pick up an additional three points for being quickest. In the No. 6 spot, they’ll race Antron Brown to start eliminations.

“It was a solid day for our Monster Energy / Flav-R-Pac team. We made some good qualifying runs and battled in the heat. Yesterday we ran a 3.80 and today a 3.85 and another 3.80 in the final session, that set us in No. 6 position going into raceday,” said Force who now has secured her spot in the Countdown to the Championship. “With a 10:30 a.m. start time there’s definitely room for improvement especially in round one. Looking to step it up and land this Monster Energy team back in the winners circle.”

Austin Prock and the Montana Brand / RMT dragster made a full pass in their second qualifying attempt, crossing the finish line at 3.930-seconds at 298.93 mph but hurt the engine at the end of the run. The run did shift them into the No. 14 spot and after shutting off early in their final session for only a 5.508 at 121.58, Prock will face Josh Hart in the first round of eliminations

“Another tough day for this Montana Brand / Rocky Mountain Twist team. Definitely didn’t go as planned. We were on a decent run in Q2 but hurt it up near the finish. Team really pulled together and got us ready that for that last session, but we dropped a cylinder early in the run and got shut off by the safety system,” Prock said. “Tomorrow is a new day, never know what can happen on race day. I know this team is due and we’re ready to start going some rounds.”

Competition at the Menards NHRA Nationals at Heartland Motorsports Park continues with eliminations Sunday at 10:30 a.m. Television coverage of the event will continue with qualifying Sunday at 1 p.m. ET on FOX Sports 1 (FS1). For eliminations, the broadcast will switch to FOX Broadcasting Network on Sunday at 2 p.m. ET.