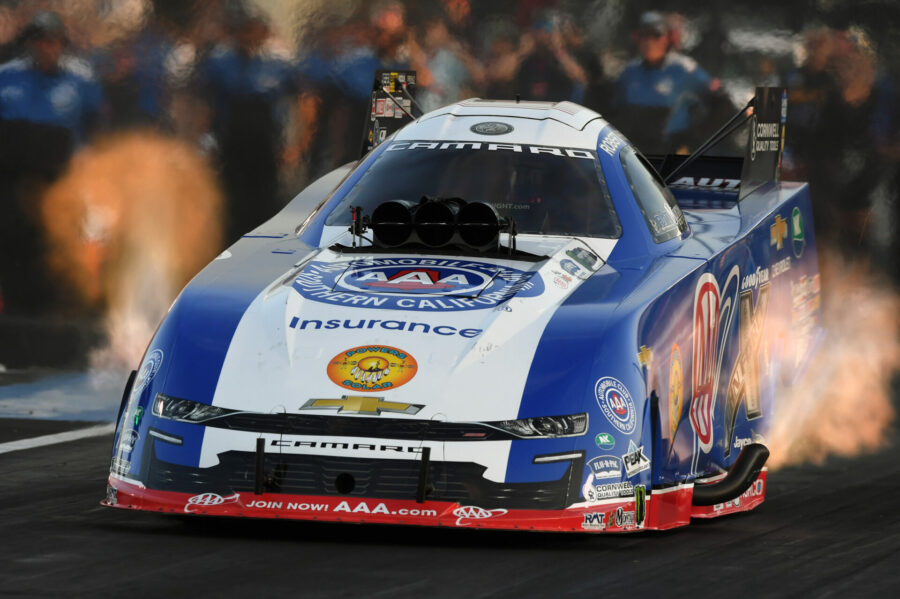 BAYTOWN, Texas (April 23, 2022) – Robert Hight and the AAA Texas Chevrolet Camaro SS team will head into the final race day at the NHRA SpringNationals at Houston Raceway Park sitting No. 2. Brittany Force and her Monster Energy dragster team will also get things started from No. 2 with Austin Prock and the Montana Brand / Rocky Mountain Twist team securing the No. 5 spot. With his specialty paint scheme celebrating the 20th anniversary of his 100th win, John Force and the PEAK / BlueDEF PLATINUM Chevy will begin race day from No. 9.

The second qualifying session of the NHRA SpringNationals was rough for the majority of the Top Fuel and Funny Car fields. Robert Hight and the AAA Texas Chevy followed trend finding tire smoke in the left lane and going only 4.414-seconds at 197.91 mph. In their final pass, the AAA Texas Camaro would have a solid 3.866 at 328.78 to be quickest of the session and earn three bonus quaifying points. They’ll start from No. 2 off of their 3.865 run at 331.36 from Friday night. Hight will be going after his fifth win at Houston Raceway Park, which is the site of his first career win in his rookie season in 2005.

“When the temperature was cool, we had as good of a car as anyone out here. We really hoped we could get this AAA Texas CHevy down the track Q2 but we went a long ways and got some good data,” Hight said. “I feel that tomorrow, in the heat, we’ll be able to tune for the run we had in Q2 and it’ll go down the track and hopefully get a win here in Houston to send this race out with a bang. I honestly feel really good here at Houston Raceway Park. We’ve had a lot of really good success here.”

Brittany Force and the Monster Energy team would run into tire smoke near half-track to coast to a 4.979-second run at 141.21 mph Saturday afternoon but, for the time being, would hold onto the No. 1. With some cloud cover in the third qualifying session, Force would handle the Monster Energy dragster to a good looking 3.714 pass at 329.50 mph. The most recent event winners would be narrowly bumped from the top spot with their 3.695 pass on Friday earning them the No. 2 position where they’ll face Josh Hart in the first round.

“We finished qualifying here in Houston at the NHRA SpringNationals. We moved down to the No. 2 spot but it’s still a great position for this Monster Energy / Flav-R-Pac team. Still a great starting position for tomorrow,” Force said. “We’ll take a look at the ladder and make some decisions. It’s tough running in the heat but we’ll figure it out going into race day.”

Austin Prock and the Montana Brand dragster had to shut off early after driving into tire smoke in the first go on Saturday afternoon. They’d go 5.340-seconds at 132.96 mph. They’d find a little more power in the final qualifying try going 3.831 at 311.27 but wouldn’t better their Friday night 3.701 that earns them the No. 5 starting spot and a race with Alex Laughlin.

“We had one of our better qualifying efforts of the year with this Montana Brand / RMT dragster. We started out really strong but stumbled in the heat with a lot of the other cars. But for the last run we weren’t going for the hero run. We were trying to set ourselves up for a good race day set up,” Prock said. “It was on track to run a mid 3.70 which would be a good, competitive run tomorrow but we dropped some cylinders. So, we’ll get the final system dialed back in tomorrow and we should be in good shape to go for a Wally.

John Force and the PEAK / BlueDEF Chevy would see improvement in his time despite also having tire smoke in the second session. Their 4.695-second run at 174.19 mph still had them sitting in the No. 15 spot with one session to go. The PEAK / BlueDEF Camaro would jump into the No. 9 spot thanks to a 3.945 pass at 324.12. Force will take on Matt Hagan in the first round of eliminations.

“Well we got it down there, we’re in the show. This PEAK Chevy, celebrating my 100th win, I’m really hoping I can get that win tomorrow, cap things off here in Houston,” Force said. “Going to be tough to say goodbye to this place but I think we all want to send it out on a high note. Really feels good to see all the fans here packing the stands, that’s what we want. We’ll see you all tomorrow and hopefully in the winners circle.”

Eliminations at the NHRA SpringNationals at Houston Raceway Park are scheduled for Sunday at 11:30 a.m. CT. Television coverage will continue on FOX Sports 1 (FS1) with a second qualifying show Sunday at 10:30 a.m. and eliminations at 7:30 p.m. ET.