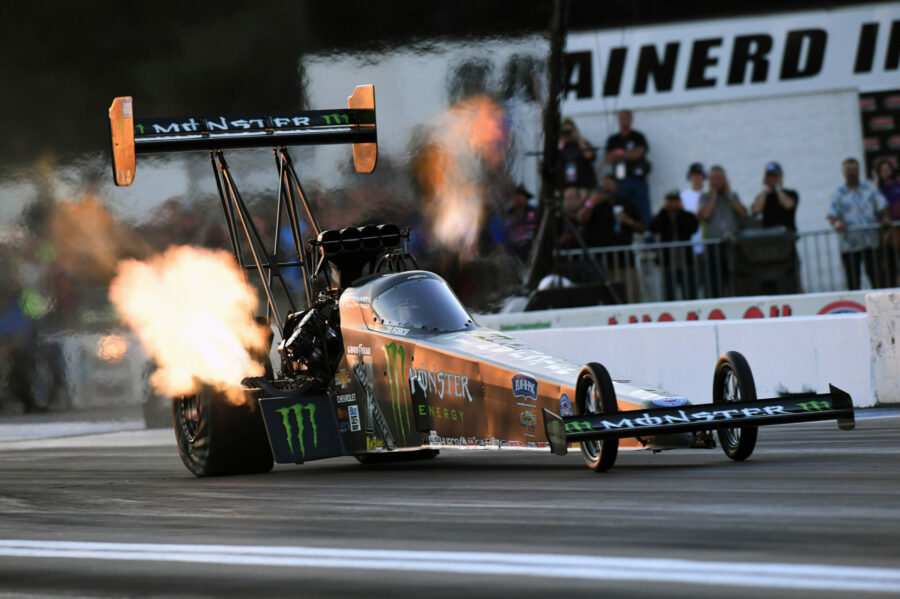 Brittany Force and the Monster Energy team drove into tire smoke in their first qualifying attempt at Brainerd International Raceway for only a 4.422-second pass at 174.19 mph. After a rain delay and under a Minnesota sunset, David Grubnic and Mac savage tuned Force to a blistering 3.685 at 333.49, putting the Monster Energy team one step closer to earning their sixth No. 1 of the season.

“This Monster Energy team was very happy with that second run, especially after not making it down there in the first one. When the rain came we got a little nervous about getting it a second session in tonight, since there’s no lights. NHRA got it cleaned up quickly and Grubnic came in and said it was a great race track so our plan before the rain was a little different after the rain came in,” Force said. “I love night racing. Nothing cooler than watching drag racing at night. Seeing the header flames, it was my favorite thing as a kid in the grandstands. We saw what was capable ahead of us and we knew we could get it done. David Grubnic and Mac Savage, they wanted to get the car down there and run in the 60s and we ran exactly what we wanted. I love this race track, we always lay down good numbers and we’ve had success here before so we’re hoping to get it done again.”

Robert Hight and the Auto Club Chevy had no problems coming out of the box to run 3.897-seconds at 328.22 mph, the second quickest run of the first qualifying session. Jimmy Prock and Chris Cunningham tuned the Auto Club Chevy to a 3.865 at 330.31 in the second session to rocket to the No. 1 spot. If it holds, Hight will earn his fourth No. 1 of the season, 75th of career.

“First off, NHRA did an amazing job drying the track and giving us great conditions to make some great runs. This is a breath of fresh air after where we’ve been with the humidity and heat. This is great conditions, and it looks like we’re going to have it all weekend so the fans are in for a treat, there is going to be a lot of side-by-side close races,” said Hight who is chasing his third No. 1 qualifier at Brainerd International Raceway. “This Auto Club Chevy, we made two runs in the 3.80s today. You have to be happy about that. Our track specialist, Lanny Miglizi, he’s been telling us numbers that are good enough to run our best all year. The air just makes it hard, a little muggy. Great job to my guys. Two consistent runs, this is exactly what we need to be doing this time of year, making consistent runs, because we’re heading into crunch time. I’m excited where we’re at for this point in the season.”

Austin Prock and the Montana Brand / RMT dragster experienced overall improvement during their Friday qualifying efforts. With two solid runs, the first a 3.760-second pass at 326.79 mph that was quickest of the first session and earned them three valuable bonus points and the second a 3.752 at 323.35 that has them nestled in the No. 10 spot, the Montana Brand / RMT team is heading in the right direction.

“Good day in this Montana Brand / Rocky Mountain Twist pit. We started out low of Q1 with a much needed clean quick run. I can’t tell you how great it felt to see a smile on all of my guys’ faces. It lit a fire inside all of us,” Prock said. “We followed up with another clean run. Was slower than we wanted but everything repeated. Parts look great and we can begin to lean on this thing. I’m excited for tomorrow.”

John Force and the PEAK Chevy started Friday in Minnesota having to shutoff early going only 5.061-seconds at 148.30 mph in the first qualifying session. There was improvement in the second session with a 4.121 at 242.98 after Force lifted just before the finish stripe.

“A little bit of a tough start for this PEAK Chevy. We didn’t quite make it down there today but there’s still tomorrow, two more runs and conditions all weekend are supposed to be good,” Force said. “I’m not worried. Danny Hood, Tim Fabrisi, they’ve gotten this car figured out and we’ll be good.”