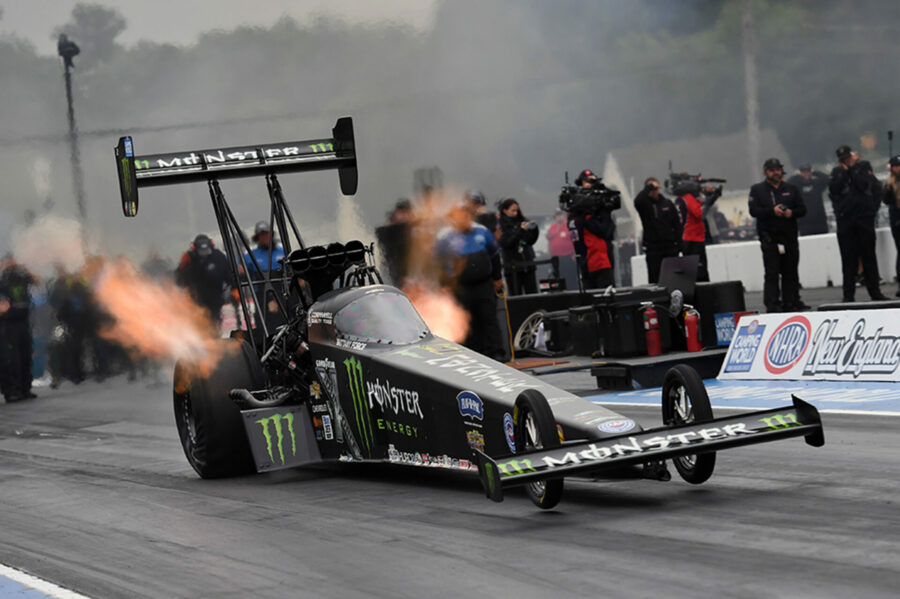 EPPING, N.H. (June 03, 2022) – It was business as usual for Brittany Force and the Monster Energy / Flav-R-Pac Chevy dragster team as they opened the NHRA New England Nationals with a provisional No. 2 qualifier at New England Dragway. Austin Prock and the Montana Brand / Rocky Mountain Twist team currently sit No. 4 while in Funny Car, John Force and the PEAK / BlueDEF PLATINUM Chevrolet Camaro SS are No. 5 and Robert Hight has the AAA New England Chevy No. 12.

Leading the Camping World Drag Racing Series points, Brittany Force handled her Monster Energy dragster to a stout 3.687-second pass at 329.50 mph. Force would have to drive through a bit of tire shake but held on to settle into No. 2.

“Back here in Epping, ended up running a 3.68 to currently sit number two. It’s a good position, we’re happy with it. We’re always aiming for top three, and we were right in our range. We were looking for a high 60, low 70 so we hit our mark. We get two more tomorrow to see if we can push this Monster Energy dragster and get it down the track a little bit quicker to set us up for a good race day.”

Austin Prock and the Montana Brand dragster would have a bit of a wild ride with cylinders going in and out before a flash of flames on their way to a 3.749-second pass at 293.22 mph. They’ll get day two of qualifying started from the No. 4 spot.

“It was definitely an exciting start to the weekend for the race fans. We put on a little bit of a fireworks show there. We had a rear oil line crack due to a parts fire that started an oil fire at about 300 feet but still made a competitive run,” Prock said. “We shut off about 200 feet early so we went 3.74 at 293.50 mph that puts us 6th so not a terrible start but definitely a little bit of work for the guys but we’ll be ready to go for tomorrow.”

John Force and the PEAK / BlueDEF Chevy were off to a good run before driving into tire smoke and shutting off for only a 5.835-second pass at 123.14 mph that puts them in the No. 6 spot.

“Not the start we wanted but Danny Hood and Tim Fabrisi, they’ll get it figured out,” Force said. “This PEAK / BlueDEF Chevy will be ready tomorrow. We get two more and now that we have one under our belt, we take what we learned and give it another go.”

Robert Hight, in his AAA Chevy livery, ran into trouble immediately. The Camaro Funny Car shut off right at the hit and didn’t make it off the starting line. The three-time championship team would record no-time but end up No. 12.

“Definitely not the way this AAA Chevy team wanted to start the weekend. We had a mechanical failure. It was basically a wire that shot the parachutes out and closed the throttle – just a safety system. The system thought that it had the burst panels out of the manifold, so it shut it off. It’s kind of a bummer because those were our best conditions to try and get the top spot. Let’s hope the clouds stick around tomorrow and we can get another shot at trying to go to the top.”

Race action at New England Dragway for the NHRA New England Nationals continues Saturday with qualifying sessions at 1:30 p.m. and 4:30 p.m. Eliminations will take place Sunday at 11 a.m. Television coverage of the event will be on FOX Sports 1 (FS1) starting with qualifying shows Friday at 9 p.m. and Saturday at 7 p.m. Eliminations will air Sunday at 7 p.m.