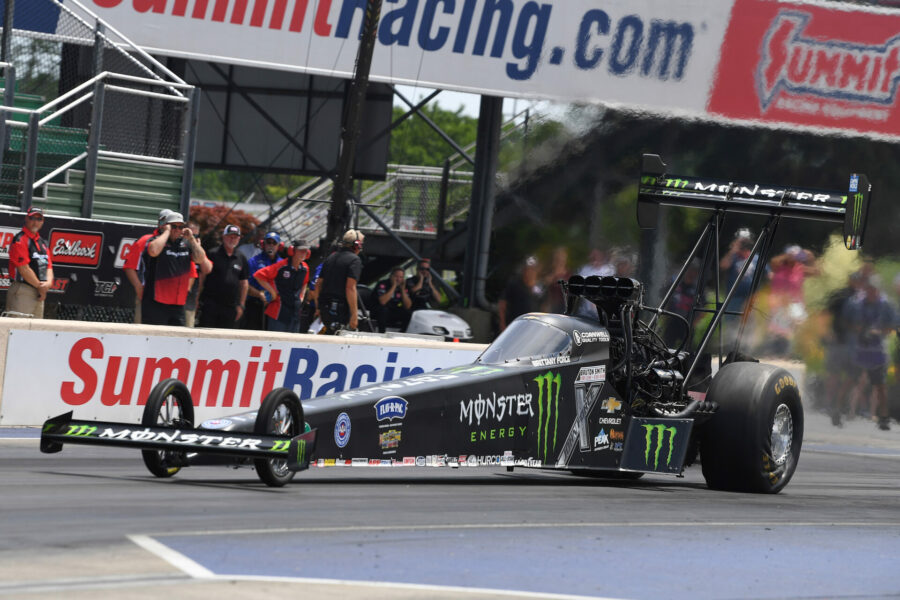 NORWALK, Ohio (June 25, 2022) – Brittany Force and the Monster Energy / Flav-R-Pac Top Fuel dragster rallied to their third No. 1 qualifying position of the season Saturday at Summit Racing Equipment Motorsports Park during the Summit Racing Equipment NHRA Nationals. John Force had four solid qualifying runs landing the PEAK / BlueDEF PLATINUM Chevrolet Camaro SS in the No. 2 spot with Robert Hight and the AAA Ohio Chevy right behind in No. 3. Austin Prock rounded things out for the John Force Racing teams putting the Montana Brand / Rocky Mountain Twist dragster in the No. 5 spot.

To start Saturday qualifying, Brittany Force handled the Monster Energy Top Fuel dragster to a solid 3.835-second pass at 324.83 mph in much warmer conditions than Friday evening. The Monster Energy dragster would misstep in the final qualifying session, smoking the tires for only a 6.133 at 101.22. Force’s track record 3.666 pass at 333.08 from Friday night landed Force her third No. 1 of the season and second at Summit Racing Equipment Motorsports Park.

“I haven’t won at this track so that’s definitely our plan coming out here. We had three solid runs in qualifying, just didn’t quite make it down in that last one. We knew after that .83 we could push it a little bit more, see what was out there,” Force said. “That 3.666 from last night puts this Monster Energy team No. 1 That’s really awesome and I’m proud of these Monster Energy guys. These runs today, they were important. We love the late night runs with those outstanding numbers but it doesn’t really help for race day. Today was important, getting that dragster down in the heat of the day in Q3, that was important for tomorrow.”

John Force and the PEAK Chevrolet were one of only two Funny Car entries to make it down the track under four seconds in third qualifying session and the only to do it in the final session. The BlueDEF Camaro would go 3.984 at 325.85 mph for two bonus qualifying points to start Saturday and then would lay down a stellar 3.950 at 326.79 to earn three points for being quickest of the session. Force would stay No. 2 from his 3.903 at 330.15 from Friday night.

“Really good weekend so far with this PEAK Chevy. We’re running well. Danny Hood, Tim Fabrisi, all my guys, they have us consistently getting down the track and we’re quick,” Force said. “I just need to do my job and we’ll go out there tomorrow and keep doing what we’re doing. We’ll see what happens.”

“We missed it this afternoon, but today’s weather is closer to what we will see tomorrow, warm temperatures. That second pass was a decent run in these conditions,” Hight said. “I’m confident going into tomorrow. It’s hard not to be with Jimmy Prock and Chris Cunningham running your car. We’ll be ready to go tomorrow and hopefully get this AAA Chevy in the winner’s circle.”

“This Montana Brand / Rocky Mountain Twist dragster made some progress today but the 1000ft elapsed time didn’t really show what we needed it to. We made gains in areas, just need to put the whole package together tomorrow. We made a good run when it counted to get us in the top half of the field. I know the ‘silver stallions’ (aka crew chiefs Joe Barlam and Rahn Tobler) will keep at it tonight and have a solid game plan for the morning. Looking forward to going some rounds tomorrow and parking this Montana Brand / RMT car where it belongs, the winners circle.”